10 Of The Most Wackiest Races On The Planet

Just when you think sports can’t get any crazier someone comes along and invents an even more wackier race. 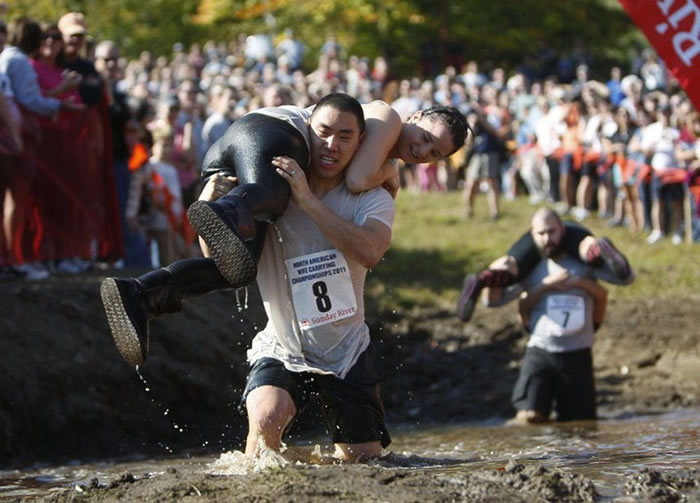 The residents of Cincinnati have come up with a wacky hot dog race. The competitors must be wiener dogs and regulations dictate that they must be dressed up like a cute hot dogs. Of course the owners get to chose their own toppings.

This wacky race is an annual event and has been running for eight years now. In fact it is starting to become so popular that over 100 contestants turn up every year for the speediest wiener title. 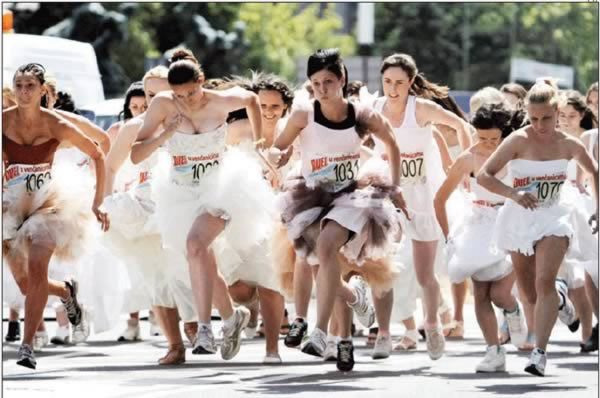 Every year over 100 Serbian brides turn up to the annual Belgrade race for a chance to win a wedding dress. The brides to be must run a 150 meter sprint in a wedding dress and the first three to finish win the dresses they wore in the race along with a few other prizes. 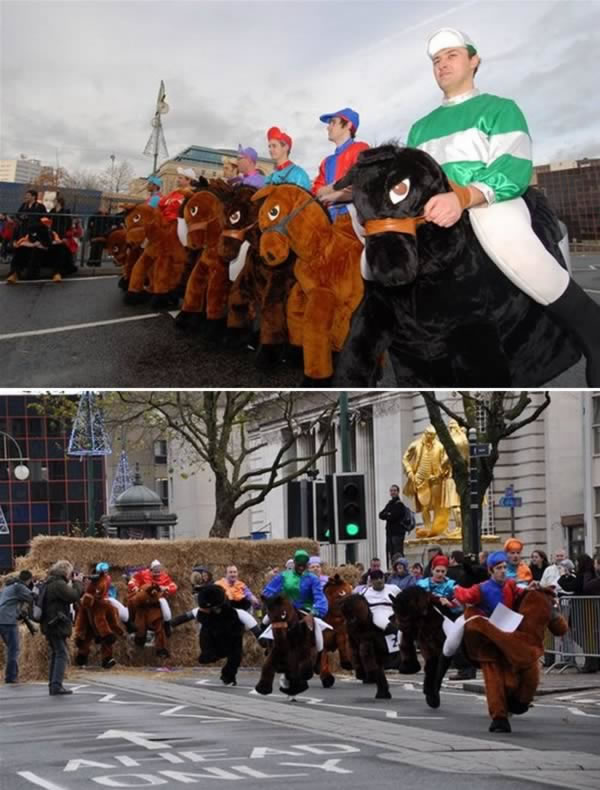 The British love racing events, especially wacky ones and it doesn’t get much more crazier than this. Designed as a parody to the famous Grand National horse race, competitors must race through the city of Birmingham while wearing a pantomime style jockey and horse costume.

As silly as this race sounds it actually has quite a following with thousands of spectators turning up to watch every year.

Contestants must pay a 50 pound entree fee and the winner gets a bottle champagne. The race is more of an annual fund raiser than competitive sport with money raised from entrance fees, sponsorships and betting on the sidelines going to the Lord Mayor’s charity funds. 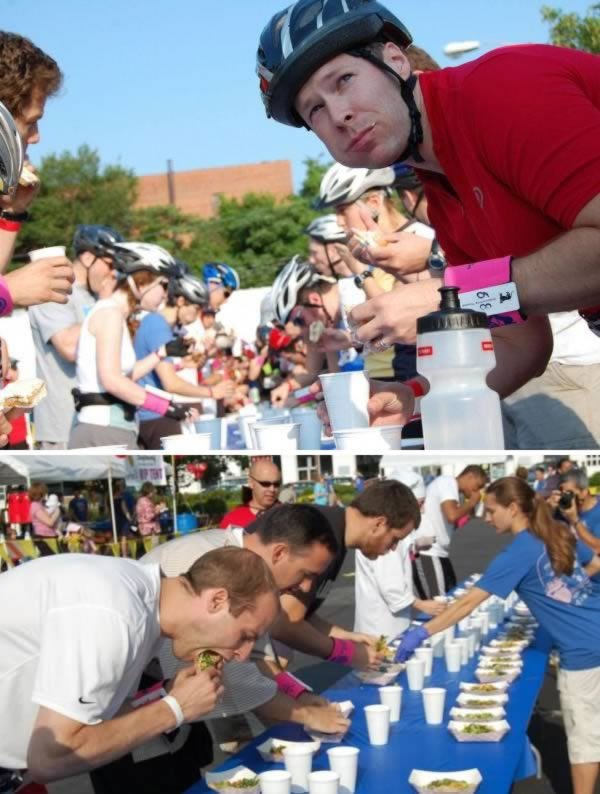 Have you ever been told “never swim after eating” well this race actually insists on it. Based in Durham, N.C., the Doughman Challenge is a crazy 4 team race which involves eating before each racing event.

Competitors must eat a delicious meal before doing one lap in the pool, then eat another meal followed by a 10-mile bike ride, then another meal before a 2.5-mile run, and finally down a last meal before a shorter 1.75-mile run to the finish line. As you can imagine the race often turns into a puking disaster.

Over the past six years The Doughman Challenge has managed to raise more than $100,000 for local charities. 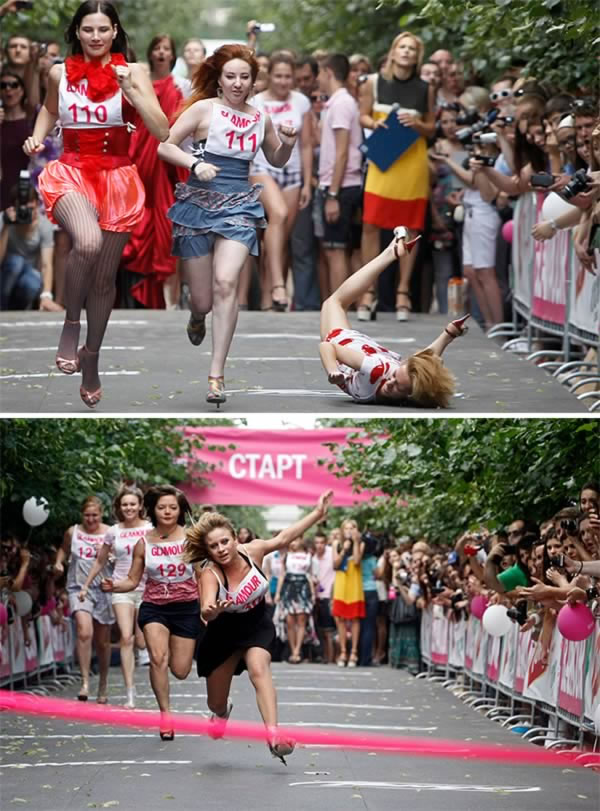 Nearly all women love shopping sprees and in Moscow women have the opportunity to to compete for that pleasure. Every year young women turn up for the Glamour Magazine Stiletto race in hopes of winning a $3,000 gift card.

Racers are required to run a 50 meter dash while wearing high heels. Many competitors tape the shoes to their feet but inevitably there plenty of trips and falls. 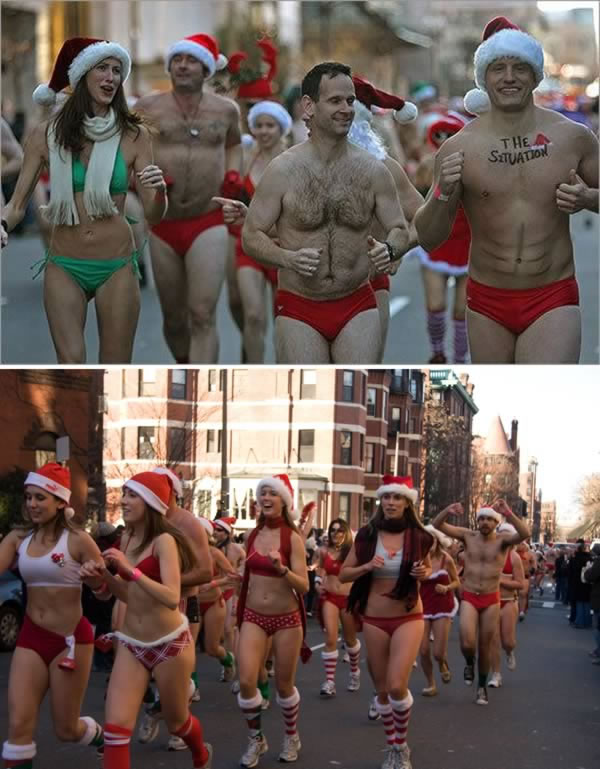 What started off as a bit fun has now turned into an annual race in Boston. Back in the year 2000 five men decided to spread some Christmas holiday spirit by running through Back Bay while wearing just Santa hats and speedos. Surprisingly the race has grown into an annual event with 700 men and women participating every year.

What’s even more crazy is that the race has managed to raise over $1.4 million for local children in need. 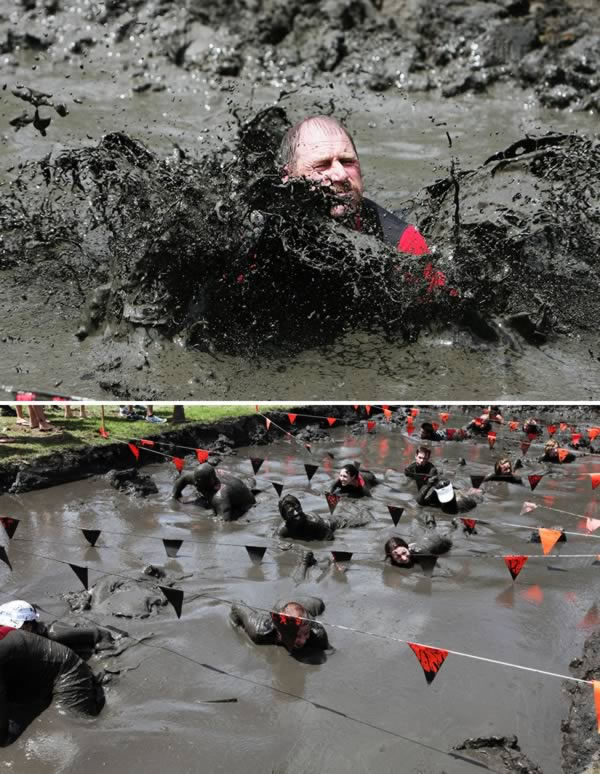 If you love playing in the mud then this race is definitely for you. While running a cross country course contestants must also wade through mud-pits, bog holes, and waist-high mud rivers to get to the finish. Racers can choose the 6km run or if they feel they are up for the challenge there is an optional 12 kilometer course. 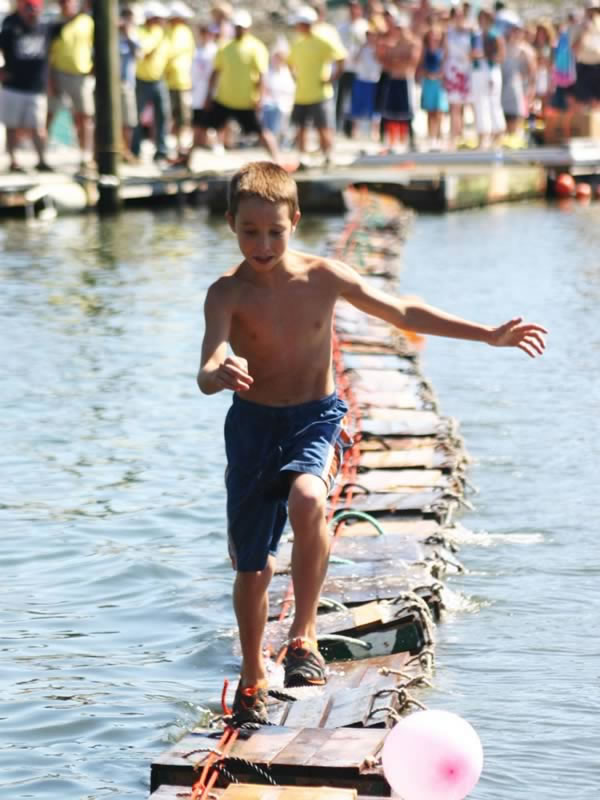 Not only is this probably the most shortest races on the list it is also probably the most fun. During the summer at Harbor Park in Rockland an annual Maine Lobster Festival takes place with a race that attracts thousands of visitors every year.

Competitors must race across lobster crates before falling into the water. The record for the longest run is 4,501 crates and is held by a 12-year old boy from Connecticut.

Even though this race is only 400 meters long it is probably one of the most toughest races in the world. The event takes place on a vertical ski slope in Planica, Slovenia with runners having to make their way to the top. The course is so steep that all competitors have to crawl most of the way.

10. Run For Your Lives Zombie Race

This is an obstacle race with a difference, racers must dodge zombies. Created by Maryland-based Reed Street Productions this is a five kilometer race with numerous challenges along the way. The main challenge is to stop zombies from grabbing the red flags of your belt.

The event was thought up as training for a real zombie apocalypse and after the race a party is held with live music, beer, food, vendors, and games.

Would you like to participate in any of these wackiest races?