I have liked the Ford Fusion for a while now and last Christmas I decided to purchase one. I have been driving the car for about 8 months now and like everything else it has good points as well as bad. So here is a list of 10 things I love and hate about the 2011 Ford Fusion.

Things We Love About The Ford Fusion 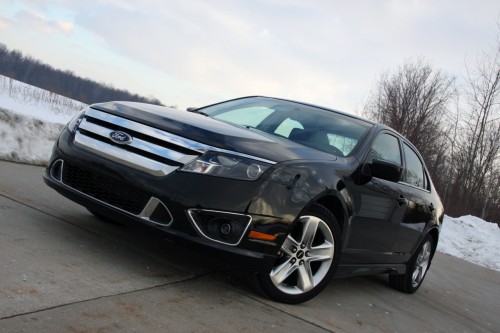 This is what attracted me to the car the most, with it’s large chrome grille and streamline features the cars is pure gorgeous. The exterior is modern and gives a sense of class while the interior boasts a high standard of luxury rivaled by its competitors.

The seats have to be one of the most comfortable car seats I have ever sat in. As soon as you relax into the seat it seams to swallow you up and wrap around you as if the chair is trying to hug you. My wife did complain a little about the head rest protruding out and forcing her neck forward but after a bit of adjusting we got that sorted out. 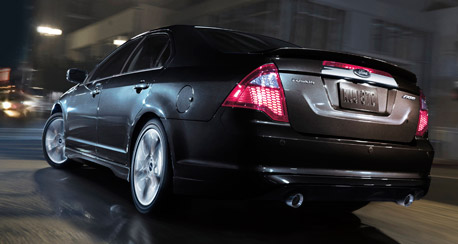 I just love the attention this car generates, I live in a small town and was one of the first to purchase the new model Fusion. Every where I went people starred in awe as I drove past, even had people taking photos of the car. I doubt the Fusion would get the same buzz in a bigger city but in a small town it’s a head turner. 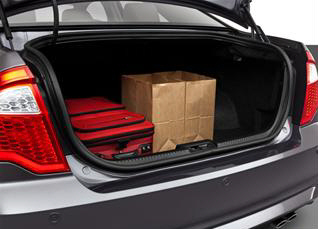 The trunk space on the Fusion is generous at 16.5 cubic feet. This is larger than many other sedans that I have driven, the back seats also drop down giving extra space when necessary. 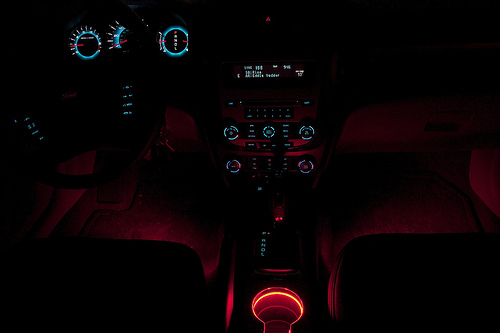 The ambient lighting is really cool but I tend to find it more of a show off feature than anything else as once you are driving you don’t pay any attention to it. The ambient lighting has seven changeable colors such as red, yellow and pink but I prefer to stick with the ice blue as it matches the rest of the dashboard lights.

Also according to Ford the ice blue is more than just a pretty color; it’s a key to optimizing the well-being of the car’s occupants. Ford claim to have done some scientific research and discovered that this color makes people feel good and even improves your mood. So Blue it is then. 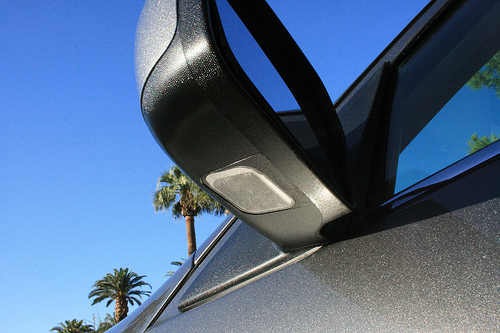 Another cool feature I like is the side mirror floor lighting. Once you unlock the doors with the remote control, lights turn on from under the side mirrors lighting up the doors and surrounding floor area. For some people this may be just another useless feature but as my car gets parked in a dark garage everyday I found it extremely useful. 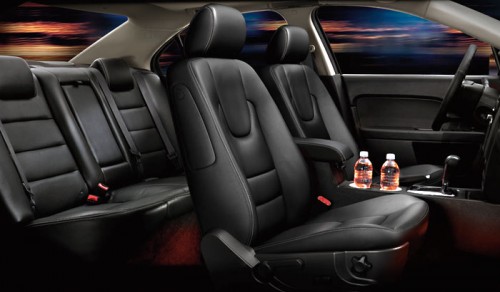 The Fusion also boasts a spacious cabin, five passengers can travel comfortably and with sufficient space on long journeys. The seats seem to be a bit larger than the class norm and can fit tall adults easily.

The Ford Fusion not only looks great but drives well too. The ride is soft and smooth and often gives the sense that you are floating more than driving. My friend often refers to it as the titanic due its size, luxury and floaty feeling. Just hope I don’t hit an iceberg. 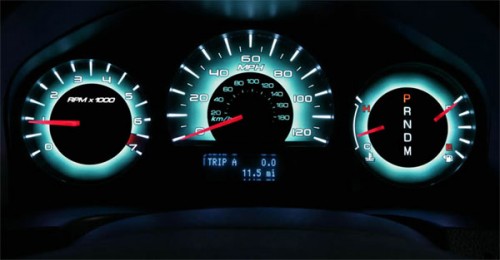 The electroluminescent instrument cluster is one of the nicest elements of the car. It is clear and easy to read whether night or day. The instrument lighting also changes automatically for light or dark conditions which is a great feature and allows you to concentrate more on the road. On many cars I found that it was difficult reading the instruments while wearing sunglasses on a nice sunny day but with the Fusion there was no problems. 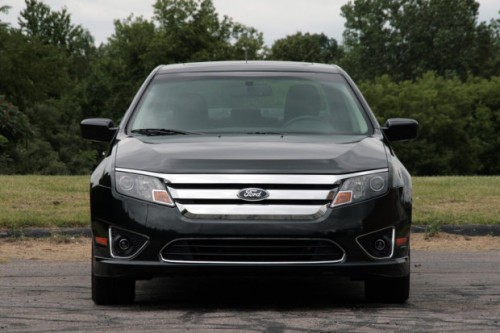 When I first purchased the Fusion the engine was so quiet that I tried restarting the engine on several occasions thinking it wasn’t running (Big Oops). Yes it’s that quiet.

The cabin also shuts out a lot of exterior noise making the ride also silent, leaving you to listen and enjoy the 12 speaker Sony stereo system that comes as standard.

Things We Hate About The Ford Fusion

Even though I love the Fusion I don’t like the fact that it is so low. OK, so it makes the car look more sporty but every time I go over a speed hump I here a scraping noise underneath as the car rides over the ramp. Also the front of the car keeps catching on the road when entering and leaving my garage. Just hope nobody looks underneath the car when its comes to selling it because after just 8 months the undercarriage is all scratched to hell. 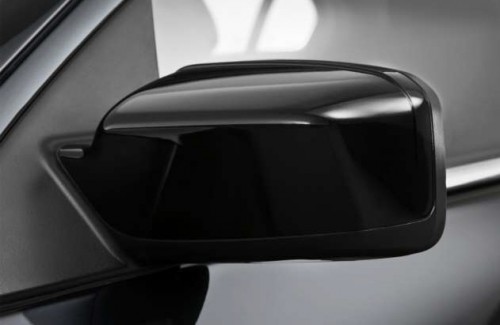 From since I can remember all cars have mirrors that you can turn in to squeeze through tight spots, some even have mirrors that turn in at a push of a button. So why the hell did Ford think it was a good idea to have fixed mirrors on the Fusion?

Maybe it was because of the floor lighting, I don’t know but the problem is the mirrors are big and stick out a lot and I have already had one mirror pranged because of the car being too wide.

3. No USB And Bluetooth For Stereo 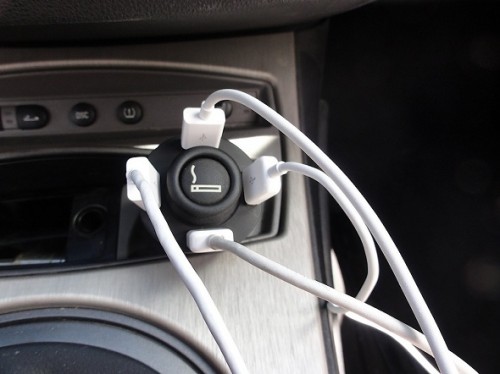 I know there is a USB conection and bluetooth on the top model but why didn’t Ford include them on the other models. This is certainly one feature I would have expected on a car of this class. Almost every other manufacturer are fitting these features as standard, come on Ford stop being so tight. 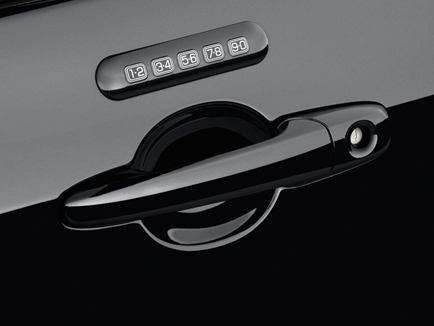 The door code pad allows you to enter the vehicle without a key but you still need a key to start the engine, so what’s the point? This feature is not necessary and to be honest makes the car look a little ugly. I haven’t had the necessity to use this since buying the car and not sure if I ever will.

This might be of advantage with a push button start but on the Fusion it’s a waste of space. Besides couldn’t Ford have made it smaller or less intrusive. 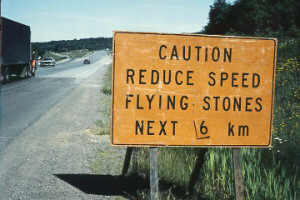 Even though the car is silent I noticed that occasionally stones fly up into the wheel arches and make a hell of a ding. I recently drove over a newly asphalted road and had numerous stones flying up into the arches, it made so much noise was like the car was being stoned. 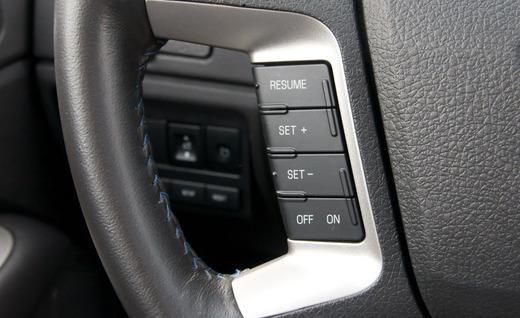 Didn’t like the auto pilot much, used it a couple of times and found it liked running at low gears and high revs. Not very good for fuel consumption. This is not too much of a problem though as I prefer to be in complete control of the vehicle.

7. Center Console Too Low And Too Many Buttons 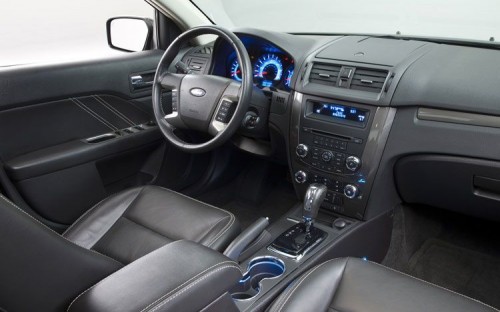 Even though the center console looks nice it is positioned way too low. I find it’s difficult to activate and change the settings while driving as it demands a look away from the road to operate. But what makes this worse is that there are so many buttons it takes a few seconds to find the right one to push and of course a few seconds away from the road could result in an accident.

What I tend to do is set everything before I pull away or get my passengers to do the settings. 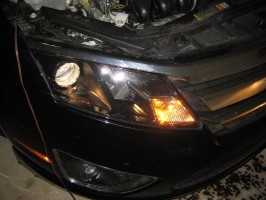 I can’t help but think the headlights are too dim. I often feel like they are not on when driving at night and constantly checking. Maybe because the car is so low that the lights are too. And unlike many other modern cars there is no way to adjust the height. 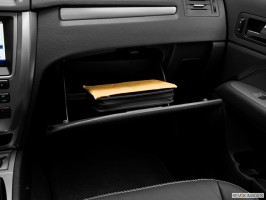 With all the luxury features and everything there is no glove compartment light. Even while traveling in the day the compartment seems dark. There are ambient lights all over the car but nobody had the thought to put one in the glove compartment. Serious Ford, what were you thinking? 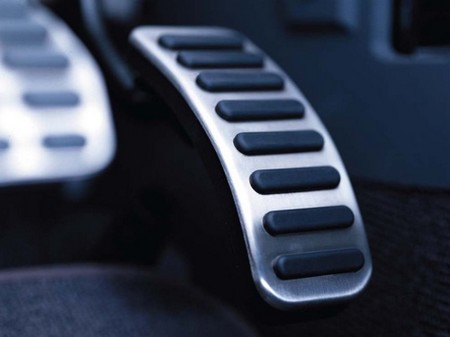 The 2.5 engine is powerful and I never feel like I need more but one thing that seems to bother me is that when you remove your foot from the accelerator the car continues to accelerate for a second or two. I am not sure if this is a common issue or whether its just my particular vehicle that suffers from this.

Driving on highways is fine but around town this can become annoying. To avoid this I find I have to accelerate very little and unable to enjoy the car’s full potential.

Well that’s my 10 things that I love and hate about the 2011 Ford Fusion. Even though it has a few bad points I absolutely love this car and would recommend it to anyone. I have owned it for over eight months and still love staring at it, it’s such a beautiful machine and a pleasure to own.

6 Benefits of Selling a Junk Car for Cash