Magical Timelapse Video Footage Of Corfu – A Company of Stars 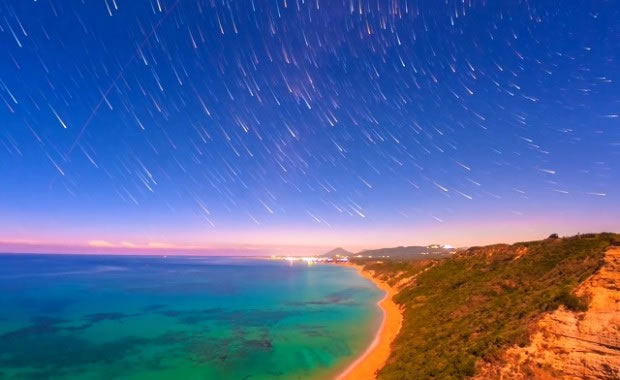 The Observation Team of Astronomic Society of Corfu have created this magical film using timelapse video footage. The film is titled, Corfu Nightscapes – A Company of Stars and shows some incredible views from around Corfu.

A company of stars, ~60,000 images of magical nightscapes of Corfu by Vasilis Metallinos paired with John Miliade’s musical creations on a journey from the old Fortress and the beauty of Corfu to the Full Moon and to the Stars!

In some parts of the video footage you can see the Moon or the Sun bigger, while in some other shots smaller. This has to do with the magnification of the telescope or lens. In shots where the moon looks huge, the distance from the ground target is very large, while the photographs is through the telescope with a focal length of 1000 mm.

When you see the moon rising behind the Old Fort, while the mountains in the distance of up to up change is because the moon moves along the ecliptic ± 5 °.

In video footage shots with stellar tracks, you can notice the movement that make stars, which essentially is the Earth that revolves around itself with speed 1674.4 km . / Hr. In fact, the rotation period of the Earth around its axis is 23 hours, 56 minutes and 4.09 seconds and called stellar day.

Corfu is a Greek island in the Ionian Sea. which is bound with the history of Greece from the beginning of Greek mythology. Its Greek name, Kerkyra or Korkyra, is related to two powerful water symbols: Poseidon, god of the sea, and Asopos, an important Greek mainland river.

The island’s history is laden with battles and conquests. The legacy of these struggles is visible in the form of castles punctuating strategic locations across the island. Two of these castles enclose its capital, which is the only city in Greece to be surrounded in such a way. As a result, Corfu’s capital has been officially declared a Kastropolis (“castle city”) by the Greek government.