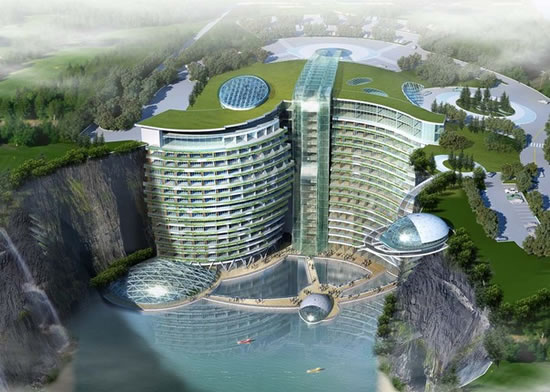 For more than a decade, China has been a front-runner in the world’s skyscraper race.

Most recently, ground has been broken on construction of a high-end hotel at the foot of Shanghai’s Tianmashan Tianma Mountain in a 100-meter-deep pit.

Developed by Shanghai Shimao Property Group and to be managed by InterContinental Hotels Group, the hotel, named InterContinental Shimao Shanghai Wonderland, is expected to extend 19 stories into the bottom of the pit. 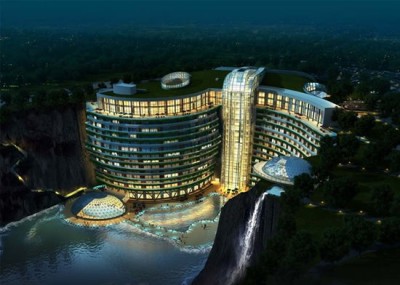 Once completed, the deepest story of the luxury resort will be approximately 700 meters lower than the top floor of the world’s-highest-hotel-to-be, the Shanghai Tower J Hotel in Shanghai Tower, set for completion around the same time.

Located about 45 kilometers southwest of Shanghai’s city center, the pit in Tianmashan is 100 meters deep, 240 meters long and 160 meters wide.

The lowest 20 meters are filled with stagnant rainwater, which the hotel will retain. 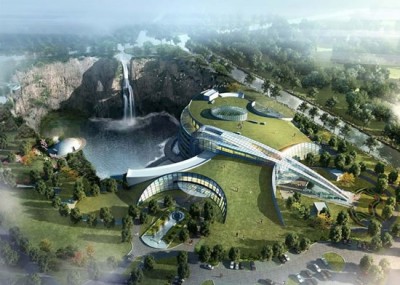 “The pit has served as a quarry since the 1950s,” said Yao Qi, senior branding manager of Shanghai Shimao Property Group. “It has been abandoned since the year 2000.”

Shimao purchased the surrounding land in 2006 in order to build Shimao Shanghai Wonderland, a large-scale theme park integrating hospitality, leisure and entertainment elements. The hotel is planned as part of the wonderland complex.

The 19-story hotel will have three levels above ground, and 16 underground, including an underwater restaurant.

“A 60-meter glass curtain will be built to mimic a waterfall next to the resort’s main structure,” said Yao. 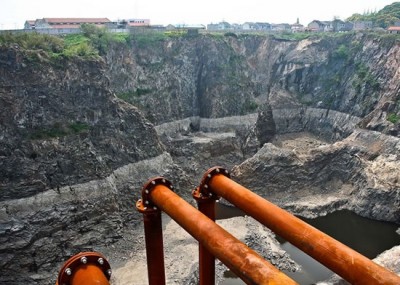