There are many marvelous and spectacular roads around the world which are worth cruising along just for the pleasure of it. Some feature winding roads across stunning mountain ranges, others hug the shores of beautiful beaches and some have a combination of both. Thanks to our friends at CNN we have you a list for you of the top ten best motorcycle and car roads in the world. 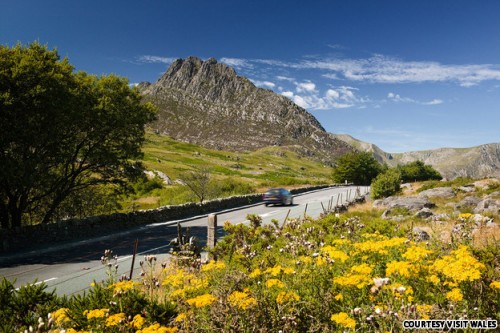 Gearheads who know their Charlie Booze Mustangs from their Austin-Healey 3000s go gaga over this triangle of empty roads, which lies to the east of the Gwydyr National Park.

The ups, downs and complex bends that work their way across the rolling Welsh moors are a dream to rag in a a classic car or cruise on a motorcycle.

“A fantastic wide and open drive on a sweeping road though the Welsh countryside,” he says.

Highlights: Sheep lovers will be in their element. Other than that, the Llyn Brenig lake and farmhouses en route are pretty striking too. 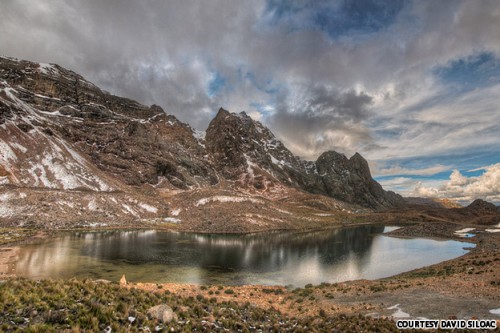 One for the adrenaline junkies, this hairy drive along the highest paved road in South America (almost 4,877 meters above sea level) sweeps through the Andes and has prayer-inducing bends, suicidal wild lamas darting out of the scenery and mountains prone to landslides.

Potentially you’ll be dodging giant boulders falling from above, but the view at the end of the paved road is worth nearly dying for.

Highlights: The Ticlio railroad is definitely worth a gander. At 4,758 meters above sea level, this is one of the highest railway lines in the world and was built to service the local mining community as well as send rich minerals including zinc and lead down the mountain. 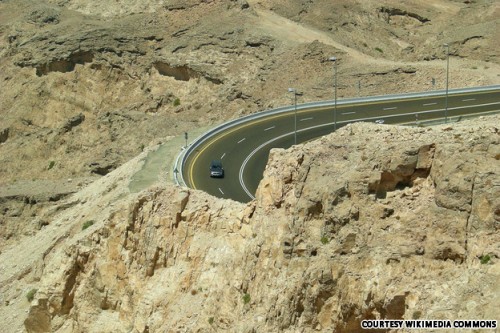 Built so that rich residents can get their kicks in their million-dollar toy cars, this road doesn’t take you anywhere — except to a private palace and an exclusive hotel.

Carved into the desert, the road is worth the journey up and back for the smooth surfaces and 60 race-track-worthy corners that snake around the Hafeet mountain.

“This is a cracking stretch of road for driving enthusiasts,” explains Phill Tromans from Evo magazine. “There’s a fast section and slow sections, it’s just perfect for technical driving.”

Highlights: Magic-eye fans eat your heart out; during summer the 45 C heat creates the illusion that the golden barren dunes in the distance are moving. If that’s not entertainment enough, there’s also a golf course at top of the hill. 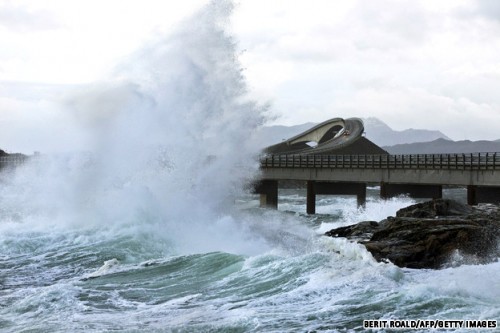 Belly-flips and bridges make up this high-octane drive along the Norwegian coastline.

The overpass dips during this journey can be experienced between Kristiansund and Molde, and regular vicious storms in the area intensify the ride.

If “technical” driving does nothing for you, get ready to see unusual birds flying overhead, while seals and whales swim off the coastline. Plus, at dusk there’s a wickedly orange sunset.

Highlights: The dark 80-meter long Bremsnes Cave, found at the Bremsneshatten Mountain, is well worth a visit.

Scuba diving off the shore during the winter months is a must-do. Marine life in this area is abundant and visibility reaches up to 60 meters. Book a trip with Strømsholmen Sea Sports Centre. 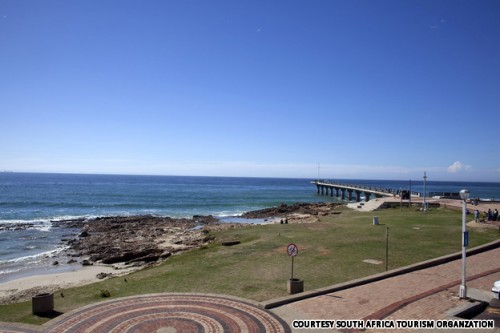 Over 65 wineries along the way will have you wishing you were a passenger rather than the driver.

Shift driving works best along this long tourist route stretching between Cape Town and Port Elizabeth, with stops at dozens of non-boozy attractions splintering off the main path, such as cliffs, fauna, rivers, valleys and plains.

Highlights: The hot mineral springs and private Roman baths at the Warmwaterberg Spa are a godsend for shoulder muscles after hours of driving.

Alternatively a two-day hike on the famed Donkey Trail over the Swartberg Mountains will get the blood pumping again before the next stretch of road.

5. The Alcan Highway, Canada to Alaska 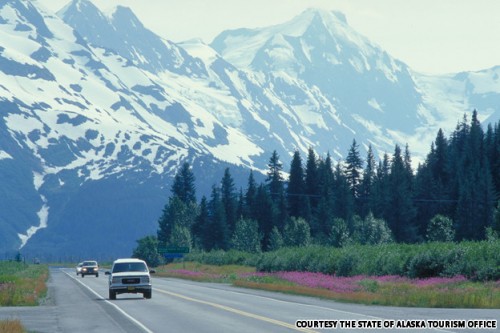 If Bear Grylls did road trips he’d be all over this mammoth long haul route in the moody North American wilderness.

Snow chains, a down jacket and an Eskie full of sarnies will serve you well in these harsh weather conditions.

In between the snowstorms, find classic mountains, sparkling lakes, dog-sleds, wolves and the odd grizzly bear.

Highlights: Hiking detours are a must. Finish up at Muncho Lake and Liard River and Liard River Hot Springs (the second largest hot spring in Canada) and take a dip in piping hot waters.

The Watson Lake Sign Post Forest is worth a bash. Alternatively, the owners at the family-run Burnt Paw and Cabins Outback motel in Tok are fanatical about dog mushing and provide free dog-sled demos daily. 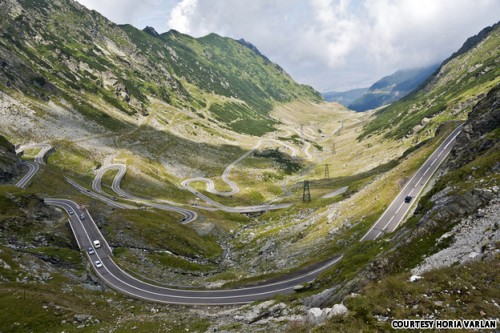 Spooky dark tunnels (the longest is more than 800 meters and pitch black), plus endless twists and turns make for a thrilling ride through Dracula territory.

The winding road from Cartisoara goes south to Curtea de Arges then zigzags from Transylvania into Muntenia, and later ascends to 2,034 meters, to the highest peak in Romania (Moldoveanu Peak).

Highlights: A surefire way to creep out your road trip buddies is to climb the 1,400 steps to the Poenari Castle, the former residence of Vlad III, the inspiration for Bram Stoker’s Dracula.

The Balea Waterfall and Vidraru Lake and Dam lie further along the track are spectacular sites. 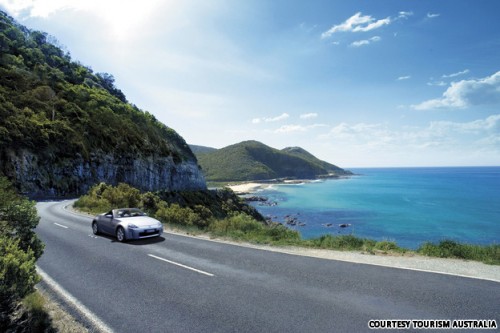 For less thrills, but extra frills, this drive has more attractions than it has cars.

“You can’t speed along, because of the speed cameras,” explains Imthishan Giado, editor of motoringme.com, “but it still offers an incredible coastline, little towns, world-class surf and The Twelve Apostles.”

Highlights: Bells Beach — made famous by the epic surf flick “Point Break.” Though the movie wasn’t actually filmed here, it still draws surfers from far and wide (word of warning before you don your wetsuit: great white sharks attack in this spot).

Swimmers are best off going for a dip at Apollo Bay, one of the safest spots in the area; the cute coastal village here also runs horse and bike riding.

The climax of this journey is, of course, the breathtaking Twelve Apostles, a collection of limestone stacks towering 65 meters above the water. 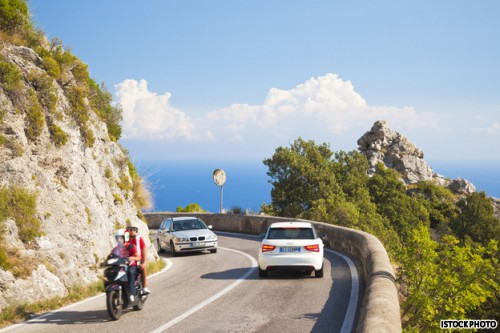 We’d forgive you for smashing up your vintage convertible MG when distracted by the pastel villages, historic churches and pristine lapping coastline here.

This is one of the prettiest routes we’ve ever encountered, and the coastal roads are crammed with enough hairpin bends to get your pacemaker screaming.

“It’s absolutely beautiful, the scenery makes this road trip,” says David Light, motoring editor at Khaleej Times. “The best way to experience it is in the summer, in a drop-top sports car.”

Highlights: The stretch from Praiano to Positano for the corniche, plus Grotta dello Smeraldo, a cave with Jade waters that look like they glow. 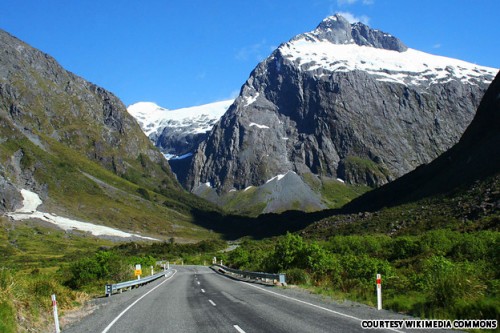 This is sort of the landscape that gives hobbits wet dreams, and we don’t blame them.

A drive through the mountains of New Zealand’s South Island, from Te Anau towards Milford Sound into Fiordland National Park, this is possibly the most scenic route on the planet.

Think mighty cliffs, snow-capped summits, waterfalls and fern trees that stick their middle fingers (or branches) up to gravity.

Highlights: It’s hard not to stop and stare at the ridiculous beauty of Eglington Valley and the Mirror Lakes (which mirror their surroundings with crystal clarity).

The Avenue of the Disappearing Mountain is also staggering — an optical illusion causes the approaching mountain to get smaller rather than larger.

So there e have it, the top 10 best Motorcycle and Car Roads in the world.
Have you ever had the pleasure of traveling on any of them? If so tell us about it in the comments below and if you enjoyed the article click the Facebook and Google plus badges below to share the story with your friends.