The Biggest Ship In The World 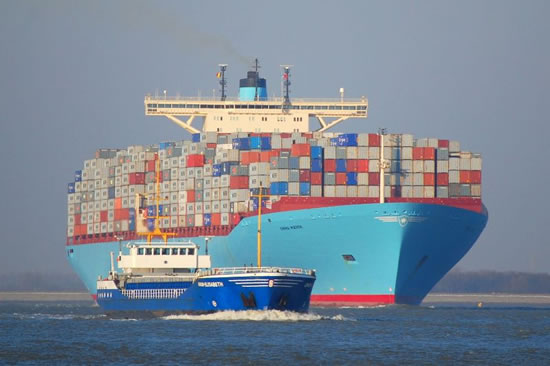 The biggest ship in the world.

Maersk launches the world’s largest, most efficient ship
At 400 metres in length, the Triple-E is a giant in the shipping industry. And Maersk Line has ordered 20 of these extraordinary vessels – the first of which is being delivered in June 2013.

Designed and built using state-of-the-art technology and embracing innovation, the Triple-E is the world’s biggest ship. But, just as importantly, it is an optimised vessel, which will allow Maersk Line to deliver more goods, while using less fuel – at lower cost. Offering Economy of scale, Energy efficiency and being Environmentally improved, the Triple-E lives up to its name, taking the industry in a new and more environmentally conscious direction.

The ship will sail on the Asia to Europe route, which represents almost one quarter of Maersk Line’s total business at a current value of several billion US dollars. This is the largest container trade route in the world and will remain so for the foreseeable future.

It makes sense to use the company’s biggest ship on this busy route where the ports will be able to handle it. Given the huge distance between origin and destination, the Triple-E’s economy of scale and its energy efficiency make it the perfect vessel.

Despite its size, the Triple-E is no gas-guzzling monster. Its increased capacity enables Maersk Line to move the great¬est number of containers possible in the most energy efficient way – and with the smallest CO2 footprint. Combined with an energy saving propulsion system, its size is a major factor in its industry-best efficiency and performance.

But the Triple-E isn’t just the largest vessel of any kind in operation today: it is also the longest and widest container vessel pos¬sible based on current port restrictions. And the reality is that the visible dimensions of the ship – only four metres longer and three metres wider than Maersk’s current largest vessel in operation, the E-class, – do not fully convey its size.

The secret of the Triple-E’s size lies in its sheer bulk. Through amazing feats of engineering, the Triple-E’s vastly expanded inside cavity – it can hold 18,000 20-foot containers (TEU) – gives it a capacity 16 per cent greater than E-class vessels, equivalent to 2,500 more containers

When the Triple-E takes to the high seas later this year, Maersk Line will have achieved the seemingly impossible – moving more goods around the world while at the same time reducing its impact on the environment.

FACTS: Triple-E – the world’s largest ship
•At 400 metres long the Triple-E ships on order by Maersk Line are larger than any vessel of any kind currently on the water. Its capacity of 18,000 TEU is a significant increase on the current 15,500 TEU capacity of the Maersk E-class
•Maersk Line’s largest ships currently sailing the world’s oceans are the Maersk E-class vessels, which are 396 metres long
•Other known large vessels include the container ship Marco Polo (also 396 metres long), the super tanker Berge Emperor 380 metres), the cruise ship Allure of the Seas (361 metres), and the war ship USS Enterprise (341 metres)
•The largest ship ever built was the super tanker Knock Nevis (458 metres). She was scrapped in 2010.
•The height (above baseline) of Triple-E is 73 metres, slightly higher than Allure of the Seas (72 metres), which currently is considered the highest • Other principal measures of the Triple-E include:
– Beam (breadth): 59 metres
– Draught: 14.5 metres
– Deadweight: 165,000 metric tonnes
– Reefer container capacity: 600
– Top speed: 23 knots
•The normal operation of the vessel will be similar to the manning of the Maersk E-class vessels (22 crew members). It is, however, possible to operate with a crew of 13. If needed, the vessel can accommodate 34 persons in total.