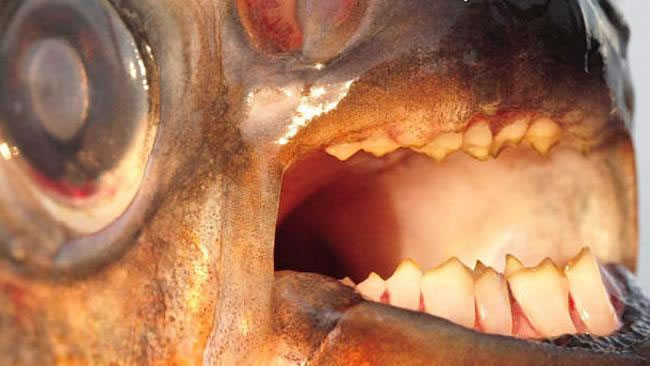 A new ball biting fish has arrived to the coasts of Sweden that may attack adventurous male skinny dippers by biting off their testicles.

The South American ball biting fish was recently discovered off the coast of Sweden and due to it’s arrival, animal experts have been warning the boldest of human swimmers to keep their delicate parts under wraps.

Recently, fishermen on the Øresund Sound reeled in a Pacu, much to the alarm of folks at the neighboring Natural History Museum of Denmark. The fish, an unwelcome new arrival that’s closely related to the piranha, boasts a set of blunt, square teeth that are apparently well suited for nibbling on one of the most sensitive parts of the male anatomy.

“Keep your swimwear on if you’re bathing in the Sound these days – maybe there are more out there!” warned the Museum, a message aimed at the region’s skinny dippers.

Henrik Carl, the Museum’s resident fish expert, tells The Local that pacu have established a reputation in some parts of the world as a “ball cutter”, and have been known to bite off the testicles of unfortunate human victims.

“They bite because they’re hungry, and testicles sit nicely in their mouth,” says Carl. He also noted that this is the first time the species has been discovered in Scandinavian waters.

It is suspected that an amateur aquarium owner or fish farmer is responsible for releasing the exotic fish into the Sound, though from a single finding of a pacu, it’s unclear how large their population may be there.

The threat alone of castration by fish, however, is likely to inspire Scandinavian skinny dippers to don a bit of swimwear, just in case.