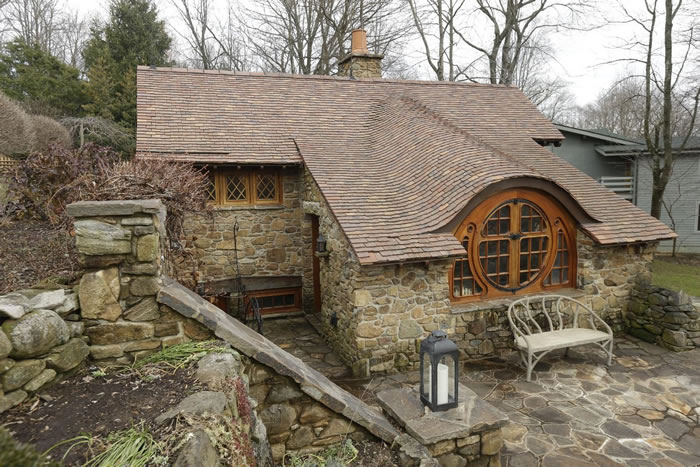 Now here’s a house that all you LOTR fans out there wouldn’t mind spending a few nights in. Or maybe, the rest of your lives. If you’ve been an admirer of the hobbits who inhabited Middle Earth in J.R.R. Tolkien’s fantasy world, this house is something you’ve got to see. The 600 sq.ft. dwelling was built by architect Peter Archer for his clients – a Chester County couple with grown kids. Lifelong fans of J.R.R. Tolkien, they wanted the house as a worthy shrine for the rare books and Tolkien-inspired memorabilia collected over a period of 30 years of travel in the U.S. and abroad. The stone cottage is tucked away into the Pennsylvania countryside, a picturesque location befitting the hobbit-style house. 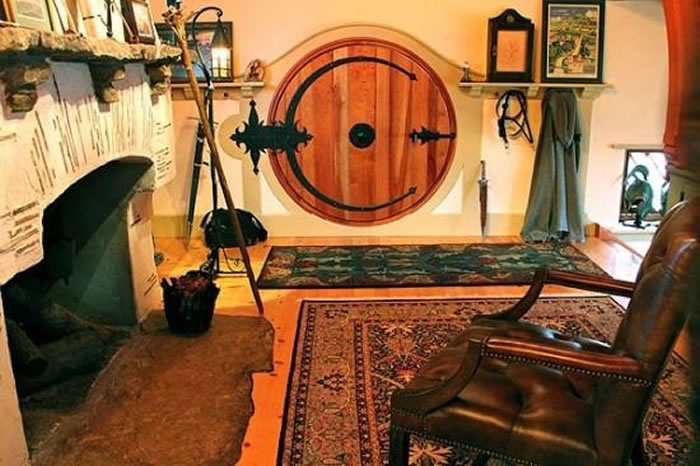 Before he took up the project, Archer wasn’t too well versed with the nature of Tolkien’s works, but he caught on rather quickly. “Upon starting the project I read the book The Hobbit and watched the Lord of the Rings movies, but more importantly, looked at the range of writings by Tolkien, including amazing sketches he had done to illustrate his work,” Archer says. “I remember at the start saying that we would be happy to design the structure but we were not going to do a Hollywood interpretation. We wanted it to be timeless. It was built in 2004 but looking at it, you could think it was from 1904 or 1604.” Working closely with another Pennsylvania architect Mark Avellino, he was able to “interpret Tolkien and create the beautiful details that make this such a special building.” He also credits the host of builders and landscape artists who put in every effort possible into the making of what has come to be known as the ‘Hobbit House’. 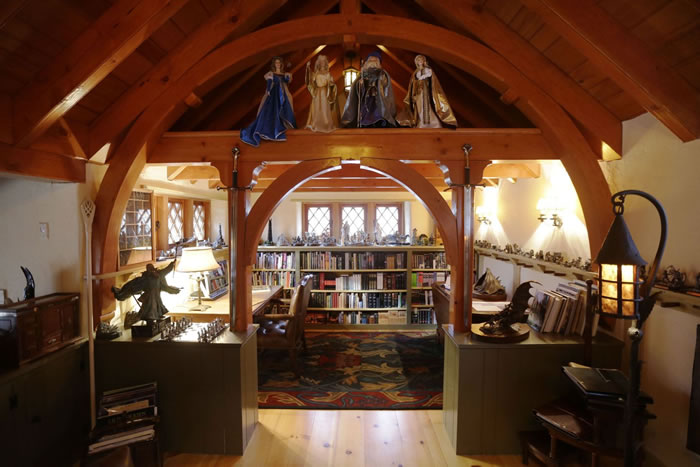 For now, the couple that owns the house lives a short walk away. A flat stone path leads the way to an English style garden, and then the cottage which is constructed with stones taken from a long-collapsed section of an 18-century low wall running through the center of the property. Archer envisioned from the beginning to make it look as though the house had risen from the wall. And so, when you look at it, it is stepped downward to follow the grade of the land, giving the impression that it has grown organically out of the stone wall. All the other materials were chosen for their colors and textures, timelessness and compatibility with the stone. The hobbit house is a single structure, and in Archer’s words, “a relaxing place that is diminutive in scale, for the owner to come and hang out and just be in solitude with his collection.” The perfectly round main door itself is a masterpiece, made from Spanish cedar. It opens with a single hand forged iron hinge and the knob rests right in the center, just as Tolkien had described it. Hanging the 150-pound door on just one hinge was a bit of a problem, but a blacksmith from Maryland managed it on the very first try. 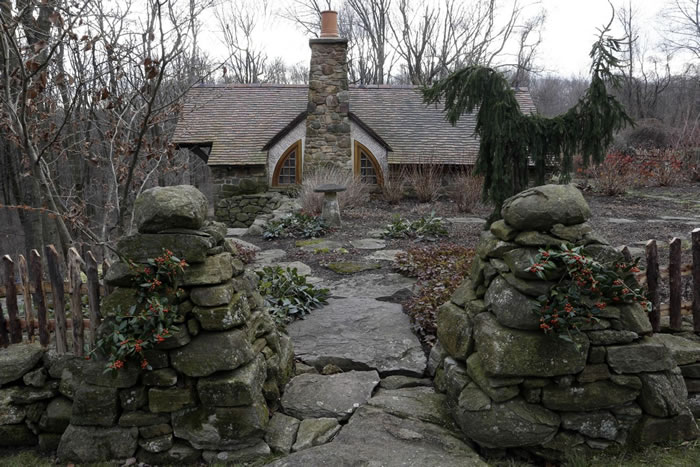 The indoor wood-work was done by a Delaware cabinet-maker – the mahogany windows and the large, arched ‘butterfly’ window. This particular window was derived from Tolkien’s own sketches. The window, when open, resembles a butterfly because the two halves are pushed outward from a center hinge. The roof of the cottage is covered with handmade clay tiles from France. Curved arches and rafters indoors are made from Douglas fir. The fireplace is finished in stucco and accented with thin slices of clay tiles. Shelves and ledgers are in abundance, for the owner to store his books and display all his Hobbit figurines, Gandalf’s staff, chess sets, chalices and hooded capes. And of course, no house of Bilbo Baggins can be complete without the One Ring. Custom light fixtures in the reception area lend a period flavor. Outside, a low, whimsical stone bridge can be found arching over a drainage ditch. According to Archer, “Once the building was designed, the clients fell in love with it and wanted to go further and create walls and gardens befitting a hobbit.” What’s fascinating is that the house has all the modern conveniences too, like heating, cooling, electricity and security systems. But it’s all hidden cleverly by the rustic design. 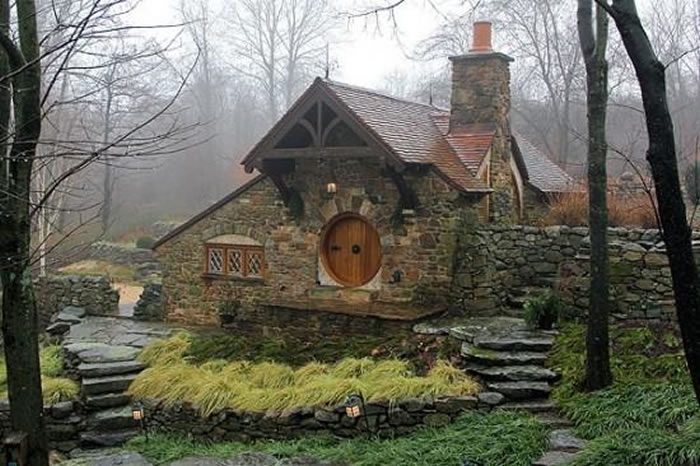 As enchanting as the Hobbit House of Pennsylvania is, the owner doesn’t want to convert it into a tourist attraction. So he has taken steps to ensure that it stays hidden – the location of the house has never been revealed in public, and the one time he did give an interview last year, he did so under a pseudonym. 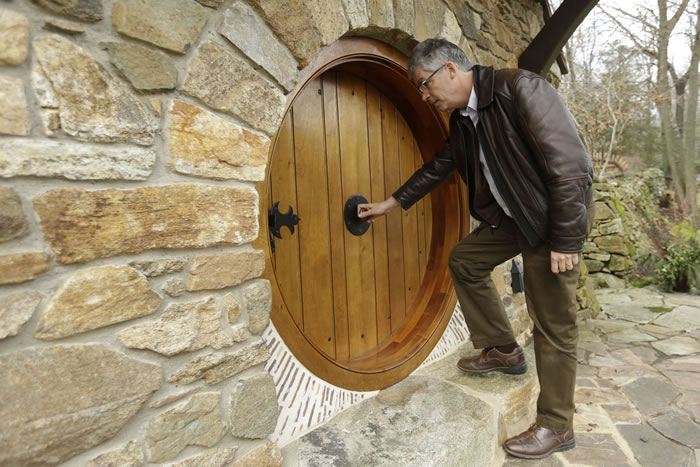