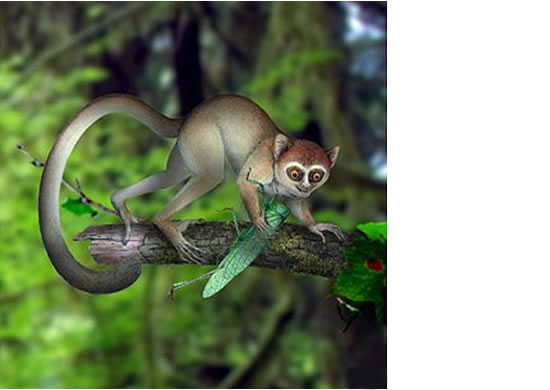 A mouse-sized fossil from China has provided remarkable new insights into the origin of primates.

At 55 million years old, it represents the earliest known member of this broad group of animals that includes humans.

Scientists have called the diminutive creature Archicebus, which roughly translates as “ancient monkey”.

They tell Nature magazine that its skeleton helps explain the branching that occurred at the very base of the primate evolutionary tree.

The team puts Archicebus on the line leading to tarsiers, a collection of small arboreal animals now found exclusively in south-east Asia.

But its great age and primitive features mean it sits right at the base of this lineage, and so Archicebus therefore has much to say also about the emergence of the tarsiers’ sister grouping – the anthropoids, the primates that include monkeys, apes and us.

And it would suggest the first of these anthropoids were, likewise, petite creatures scurrying through the tropical canopies that grew to cover the Earth shortly after the dinosaurs’ extinction.

Archicebus Artist’s impression: Archicebus lived on a very warm “forest planet”
“We are all very curious about the ancestors of primates, including those of human beings,” said Dr Xijun Ni from the Chinese Academy of Sciences, Beijing, China.

“From this almost complete skeleton, we can conclude that our ancestors were a kind of very small animal. It was very active and agile; and it lived in the trees and fed on insects,” he told BBC News.

The Archicebus fossil is preserved across two slate slabs. Most of the animal’s key bones are recorded, including exquisite impressions of its rear limbs and feet.

The specimen was originally discovered in the Jingzhou area of Hubei Province some 10 years ago by a local farmer, but Prof Ni and colleagues have deliberately taken their time to describe the creature and assess its importance.

Their investigation has included sending the delicate slate pieces to Grenoble, France, to be imaged at the European Synchrotron Radiation Facility (ESRF).

This giant machine uses brilliant X-rays to try to discern details of the skeleton that remain hidden inside the rock.

“There’s no way you can prepare the fossil any better to see its features because you would end up with a powder; it’s extremely fragile,” explained the ESRF’s Dr Paul Tafforeau. “But when you scan it with synchrotron light, you can virtually extract the bones without touching them. This gives you access to the general anatomy and we can achieve very high resolution.”

The forensic study has allowed the scientists to build a picture of the type of animal Archicebus was in life, and to gauge its relationship to all other primates.

Many people may be taken aback by the animal’s small size – a body just 71mm in length and an estimated weight of about 20-30g. But Archicebus gives us a good idea of what the very first primates on Earth would have looked like.

They would have emerged in a pivotal period, said senior Nature editor Dr Henry Gee, when the Earth was gripped in a period of outstanding global warming.

“At this time, 55 million years ago, the Earth was a jungle planet,” he told BBC News. “The whole Earth was covered with tropical jungle – full of trees for little scampery things to climb up and down on. It was an ideal time for primates to be evolving.”

Particular features of Archicebus’ skeleton suggest it would have used a leap-and-grasp motion as it traversed through these great forests.

Its small pointy teeth indicate that it ate insects. Certainly, its size would have meant it had a high metabolic rate, and preying on insects would have satisfied its calorific needs.

And the creature’s relatively large eye sockets suggest it had good vision for hunting, but the team says the evidence points towards Archicebus being a daytime operator, not a nocturnal animal.

One of the most significant observations is the shape of its heel bone. Far from being like a tarsier’s calcaneus, the bone is more reminiscent of what one would expect in an anthropoid.

Dr Chris Beard from the Carnegie Museum of Natural History in Pittsburgh, US, recalls: “The heel, and the foot in general, was one of the most shocking parts of the anatomy of this fossil when we first saw it; because, frankly, the foot of this fossil primate looks like a small monkey, specifically like a marmoset.”

It emphasised, he said, Archicebus’ proximity to the split in the two lineages.

“What is means is that the common ancestor of tarsiers and anthropoids had some features that looked more like anthropoids than tarsiers. And I guess we shouldn’t be so surprised by this.”