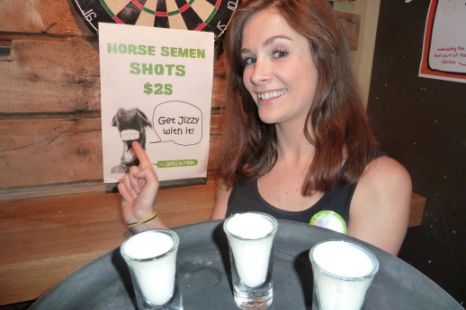 Back in 2011 a pub in Wellington, New Zealand, started selling apple-flavored horse semen shots to its customers. The unusual cocktail was thought up to compete in a yearly wild food competition and it created quite a buzz.

Steven Drummond, co-owner of the Green Man Pub, in Wellington, was looking for a new drink as the entry for the nationwide 14th annual Monteith’s Beer & Wild Food Challenge, when he realized the sperm harvested from a nearby Christchurch stallion farm would make a fine choice. Add some apple flavor and viola, you have the most disgusting shot ever served in a bar. And the weirdest thing is people actually pay big money to try it. If someone paid you to drink horse semen, I’d (kind of) understand, but when you’re the one paying $20 for a shot of the stuff, you have a problem.

According to Green Man Pub chef, Jason Varley, the horse semen drink known as “Hoihoi tatea” is particularly preferred by the female clientele. Most ladies down the stuff and afterwards make jokes about going home and getting their husbands to eat grass, or about the possibility of their children being born with long faces. Varley admits he tried horse semen himself and claims it tastes “ok”, “like custard”, but says it’s not very popular with men, in general.

Despite possible health benefits of drinking sperm, like boosted testosterone levels due to the DHEA hormone, none of the customers who tried Hoihoi tatea came back for seconds. The Green Man staff actually advise customers to drink the shot in one gulp, instead of trying to sip it like a delicious cocktail. If you want to try apple-flavored horse semen yourself, I suggest you hurry, as it’s only available until July 3, when Monteith’s Beer & Wild Food Challenge ends.

Would you down a shot?