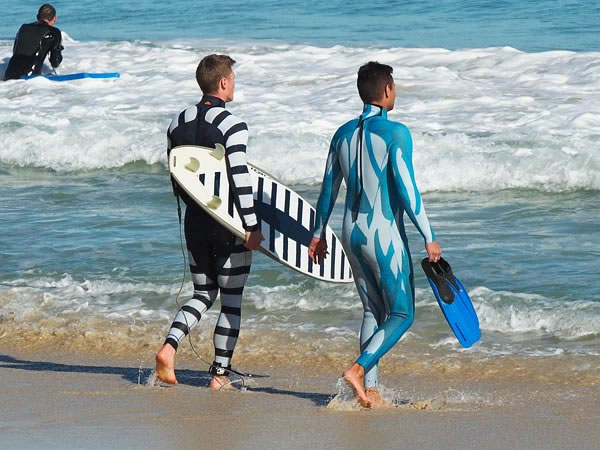 A company in Australia has started selling a new wetsuit design that they claim will make swimmers invisible to sharks.

The $495 full-body wetsuit is colored to look like the ocean, patterned in white and various shades of blue. The company that introduced it this week, Shark Attack Mitigation Systems, also makes stickers with similar patterns that can be applied to surfboards, dive tanks, and kayaks.

But even if the this new wetsuit design is visually effective, it may not prevent a shark from detecting the person wearing it. That’s because sharks rely on other senses—smell, taste, and an ability to detect sounds, such as that of bubbles released by a diver’s gear—more than sight.

In fact, research done by the University of Western Australia’s Oceans Institute shows that 17 species of sharks, including tiger sharks and bull sharks, lack color vision.

Besides the camo suit, the firm has also released one with black, blue, and white stripes. The contrasting pattern is meant to mimic the appearance of marine life such as sea snakes or lionfish.

Since sharks don’t normally dine on these creatures, the idea is they wouldn’t take interest in a human wearing a striped suit—the same thinking behind another venture in which rash guards are striped to look like lionfish.

But George Burgess, director of the Florida Program for Shark Research, says all such suits might actually have the opposite effect. Because sharks see contrast particularly well, he says, a moving striped object would be “highly attractive” to them.

“That striped suit that is supposed to look like a lionfish is about as nice a thing as you can do to attract a shark, because of the contrast between dark and light,” he said, adding that the new blue-and-white design from Shark Attack Mitigation Systems might work better if it incorporated counter coloration.

That’s the name of a natural cloaking strategy—in which the part of a fish near the dorsal fin is a darker color than the belly, which is white or silver—used as a defense against big predators. If a predator looks down, the fish’s dark top is hard to differentiate from the ocean floor. If a predator looks up, the light belly blends in with sunlight coming from above the water.

Burgess says that although shark attacks on humans are extremely rare—accounting for an average of just five fatalities a year worldwide—the only surefire way to avoid one is to stay out of the water.

Still, he said, “most sharks are not looking for humans, because humans aren’t part of the natural world they live in.” But “anything we can do to reduce our loss is always as good for us as it is for the sharks who get a bad rap.”