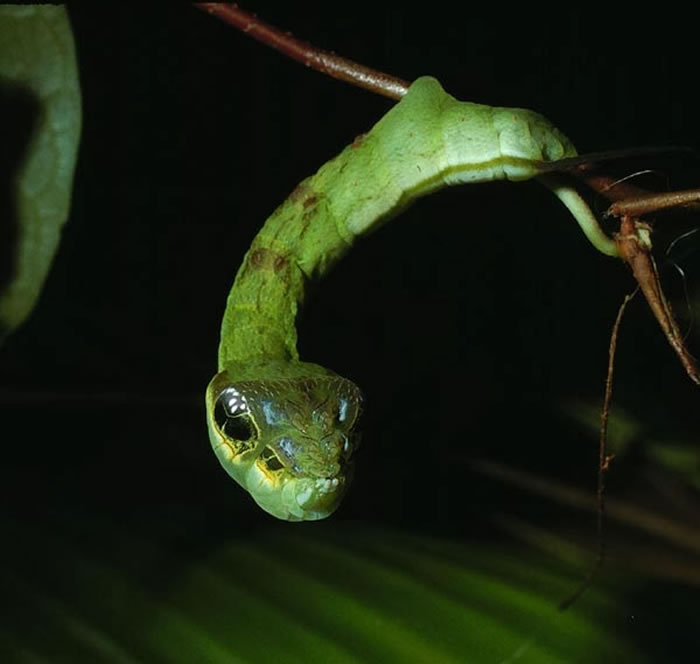 At first glance you would think this is a creepy snake but its not. It is actually a clever caterpillar that is a master of disguise.

Looking at a photo of Hemeroplanes triptolemus, nine out of ten people would swear it’s a creepy snake. But look closer, and you’ll realize there’s something peculiar about it – the body is unusually short and ends abruptly with a large reptilian head. The truth is, it’s not a creepy snake at all. The Hemeroplanes is actually a caterpillar pretending to be a snake. And it does a darn good impression of the deadly creature, often fooling curious travelers and predators alike.

Hemeroplanes are moths to the Sphingidae family, found in many parts of South America, Africa and Central America. In the larval form, they are capable of expanding their anterior body segments to closely resemble a snake, complete with reptilian scales and scary eyes. To make their mimicking act even more believable, the harmless caterpillar will sometimes even snap at potential predators. Of course, they have no real fangs so they can’t really do any serious damage, but their appearance is convincing enough to scare even humans away. 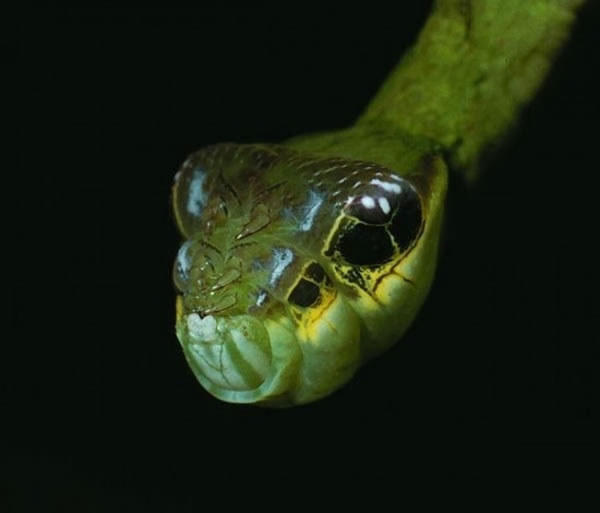 What’s incredibly fascinating about Hemeroplanes is that they are able to completely transform their appearance into a creepy snake. It’s almost like magic. They’re quite rare to spot, but those who were lucky enough to witness the transformation are left stunned. Here’s what we found on the website of Tracie ‘the bug lady’, who runs a nighttime adventure trek in the rainforests of Drake Bay, Costa Rica:

“At first glance, this large caterpillar was quite ordinary. As Tracie lowered the branch, we realized that the caterpillar was changing… becoming something entirely different. After posing placidly for a few shots, the caterpillar suddenly released the twig on which it was perched and hung dangling by its rear set of legs. It began to pull the tip of its head inward, puffing out the front part of its body.” 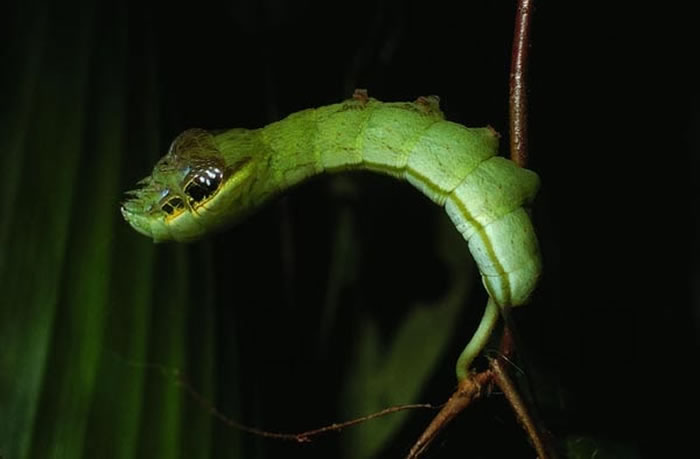 “Gradually, previously hidden shades of yellow, white and black lit up the caterpillar’s new ‘face’. Then, what appeared to be eyes, nostrils and scales slowly began to materialize. It quickly dawned on us that this caterpillar was transforming into a snake before our eyes! In just a few seconds, Hemeroplanes looked much more like an Eyelash Viper than it did a caterpillar. Just when we thought it possibly couldn’t get any weirder, it did. The caterpillar began to flail, as if trying to strike out at us!”

Tracie and her companions were awestruck, wondering if all this was really possible. They quickly returned home to find out more about the wondrous insect, and then came to know that it was a Hemeroplanes. Their research also revealed that the caterpillar came in two varieties – Hemeroplanes triptolemus usually found in the Dry Forest, and Hemeroplanes ornatus which lives in the Rainforest. Both caterpillars are quite harmless; they feed on the leaves of apocynaceous vines.