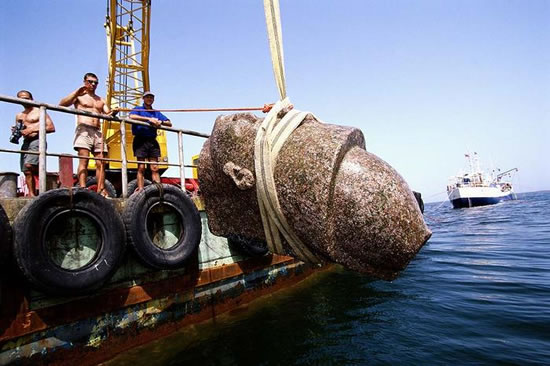 Lost Egyptian city found under the sea After 1200 Years.

1,200 years ago the ancient Egyptian city of Heracleion disappeared beneath the Mediterranean. Founded around 8th century BC, well before the foundation of Alexandria in 331 BC, it is believed Heracleion served as the obligatory port of entry to Egypt for all ships coming from the Greek world.

Prior to its discovery in 2000 by archaeologist Franck Goddio and the IEASM (European Institute for Underwater Archaeology), no trace of Thonis-Heracleion had been found (the city was known to the Greeks as Thonis). Its name was almost razed from the memory of mankind, only preserved in ancient classic texts and rare inscriptions found on land by archaeologists. 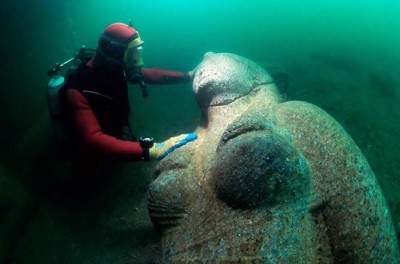 With his unique survey-based approach utilising sophisticated technical equipment, Franck Goddio and his team from the IEASM were able to locate, map and excavate parts of the city of Thonis-Heracleion, which lies 6.5 kilometres off today’s coastline about 150 feet underwater. The city is located within an overall research area of 11 by 15 kilometres in the western part of Aboukir Bay. 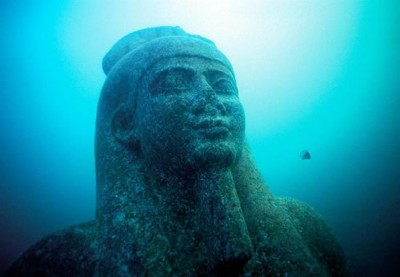 Findings to date include:
– The remains of more than 64 ships buried in the thick clay and sand that covers the sea bed
– Gold coins and weights made from bronze and stone
– Giant 16-ft statues along with hundreds of smaller statues of minor gods
– Slabs of stone inscribed in both ancient Greek and ancient Egyptian
– Dozens of small limestone sarcophagi believed to have once contained mummified animals
– Over 700 ancient anchors for ships 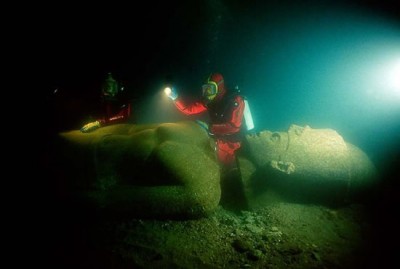 Research suggests that the site was affected by geological and cataclysmic phenomena. The slow movement of subsidence of the soil affected this part of the south-eastern basin of the Mediterranean. The rise in sea level also contributed significantly to the submergence of the land. The IEASM made geological observations that brought these phenomena to light by discovering seismic effects in the underlying geology. 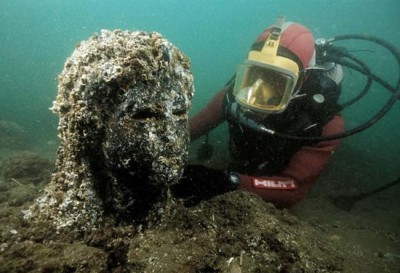 Analysis of the site also suggests liquefaction of the soil. These localized phenomena can be triggered by the action of great pressure on soil with a high clay and water content. The pressure from large buildings, combined with an overload of weight due to an unusually high flood or a tidal wave, can dramatically compress the soil and force the expulsion of water contained within the structure of the clay. The clay quickly loses volume, which creates sudden subsidence. An earthquake can also cause such a phenomenon. These factors, whether occurring together or independently, may have caused significant destruction and explain the submergence of Thonis-Heracleion. 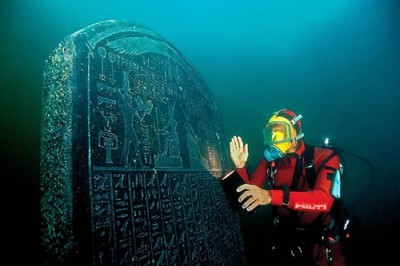 Franck Goddio is a pioneer of modern maritime archaeology. After graduating from the École Nationale de la Statistique et de l’Administration Economique in Paris, Franck Goddio conducted economic and financial counselling missions in Laos, Vietnam and Cambodia for the United Nations, and later for the French Foreign Ministry.

In the early 1980’s he decided to dedicate himself entirely to his passion – underwater archaeology – and founded the Institut Européen d’Archéologie Sous-Marine (IEASM), of which he is currently president. Goddio has initiated and directed a number of excavations on shipwrecks including seven junks from the 11th-16th century, two Spanish galleons and two trading vessels of the British East India Company. 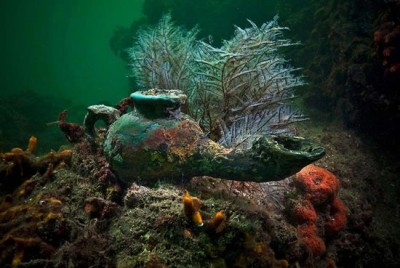 Goddio’s most ambitious project is conducted off the coast of Egypt, in Alexandria’s ancient eastern harbour and in the Bay of Aboukir (30km east of Alexandria). In partnership with the Egyptian Supreme Council of Antiquities a vast area the size of Paris has been mapped and investigated since 1992. In 2000, the ancient city of Heracleion and parts of the city of Canopus were discovered. The research is ongoing to this date. 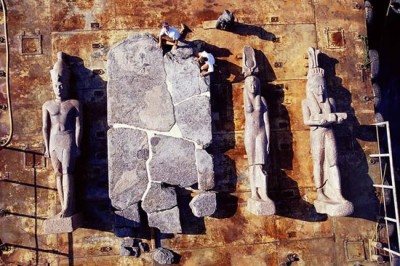 Excavation projects directed by Goddio have a strictly non-commercial purpose and his work is always carried out in cooperation with the national authorities in whose territorial waters the exploration is taking place. The excavation work is founded on legal provisions that regulate underwater excavations and on international archaeological standards (UNESCO Convention on the Protection of Underwater Cultural Heritage).