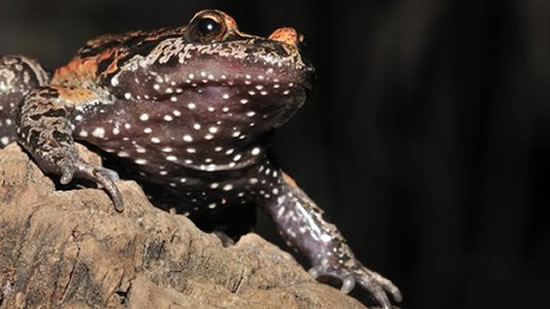 A species of frog that was recently rediscovered after being declared extinct has been reclassified as a “living fossil”.

Israel’s Hula painted frog had not been seen for nearly 60 years, but in 2011 one was found lurking in a patch of swampy undergrowth.

Tests have revealed that the frog belongs to a group of amphibians that died out 15,000 years ago.

The study is published in the journal Nature Communications.

Professor Sarig Gafny, from the Ruppin Academic Center, in Israel, told BBC News: “We felt like we had a great finding when we first rediscovered it – this (frog) was like an idol in Israel.

“But then we found it was a living fossil: this was amazing.”

Even before it was declared extinct in 1996, the hula painted frog was an elusive creature.

Despite its distinctive black-and-white-spotted belly, only three adults had ever been seen.

When Israel’s Hula valley was drained in the 1950s, its swampy home was destroyed. Scientists thought the species had been lost forever.

But two years ago, a frog was spotted by a park ranger, and since then another 13 have been discovered.

Prof Gafny explained: “We’ve only found the specimens so far out of the water on land.

“You have to crawl in the dense vegetation, there are blackberries there, which are spiny, and then you have to dig in the decaying detritus… It’s not very attractive to go and look for it.”

But the discoveries have allowed the scientists to study the species in detail.

The frog had been classified as a member of the Discoglossus group of amphibians, but genetic tests and CT scans have revealed that it in fact belongs to the Latonia group.

These frogs were once widespread throughout Europe for millions of years, but all apart from the Hula painted frog died out about 15,000 years ago.

“Nobody ever had a chance to see a Latonia because it went extinct in Europe. The only way anyone could see it was through looking at fossils,” explained Prof Gafny.

“But then with every characteristic that you look at in the current Hula painted frogs, it matches that of the fossils of Latonia and not that of the Discoglossus… So this is a living fossil.”

The researchers said the frog was “a strikingly resilient” species – but added that it was now vital to ensure its future survival.

They believe that work to re-flood parts of the Hula valley would help to provide it with a habitat where it could thrive.