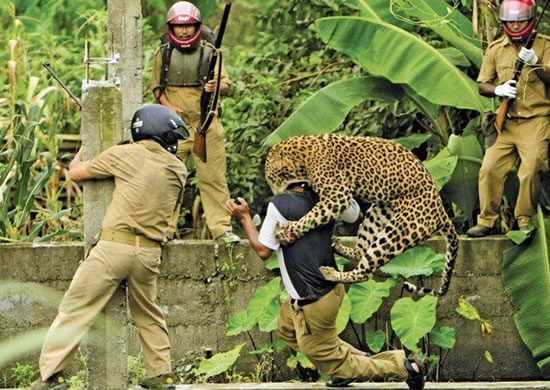 A wild leopard has mauled six people after it strayed into an Indian village in an attack that was caught on camera.

The big cat pounced on a forest guard at Prakash Nagar village in West Bengal.

Another man and a local woman were also among those attacked in the densely-populated slum village which is home to about 3,000 people.

Terrified villagers climbed on to roofs to escape and watched on in horror as forest guards tried to fight off the animal with their weapons.

And just as forest officials thought the attack was over when the animal took refuge in a bush, it quickly re-emerged again and attacked three policemen.

A wildlife official said the big cat was startled by the hundreds of curious and frightened onlookers.

Kanchan Banerjee, a forest ranger from the Sukna Wildlife Range, told local newspaper The Hindu: “With the villagers trying to chase it, it tried to flee and injured five villagers in the process.”

He said one forest guard was critically injured while others were not so seriously hurt.

The leopard was eventually shot and tied up before being taken to a nearby veterinary clinic where it later died.

It is not the first time a leopard has wreaked havoc in India with local media reporting in January how a feline went on an eight-hour rampage, racing through the streets and into people’s homes and attacking at least six people in the 60,000-resident northern city of Karad.

After two gunshots fired in the air by police failed to scare off the animal, the leopard was killed by two shots at close-range from a police officer’s revolver.

Indian farmers also often report deaths of cattle and other animals as a result of wild leopards.