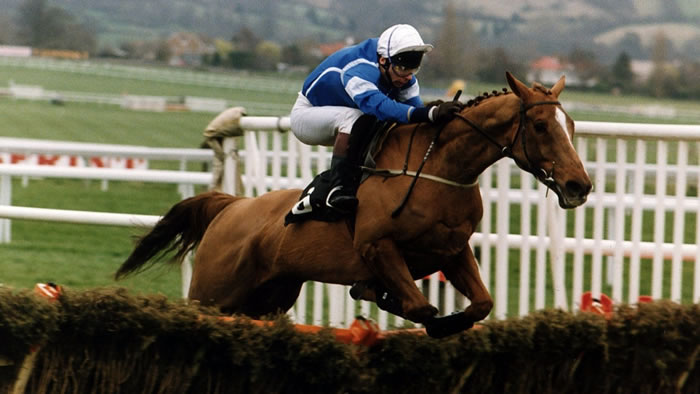 Peter Scudamore (aka ‘Scu’) hails from such a powerful racing dynasty it’s easy to forget some of his outstanding moments in the saddle.

Then again, given he retired in 1993 after riding Sweet Duke to victory at Ascot, a whole generation would be unaware of his exploits let alone recalling some of his finest moments – fear not we are happy to help!

Amazingly ‘Scu’ recovered from a broken leg sustained mid-season (November 1990) to win the title with 141 winners and he set a season win record of 221 winners during the 1988/89. The previous record was 149.

Scu’s primary employer back in his glory days as champion jockey was the legendary Martin Pipe who, like his rider, was driven by success.

A 15-time champion trainer who trained a total of 4,183 European winners, he provided Peter Scudamore with 792 winners which is almost half of his 1,678 career total.

It must not be forgotten that there wasn’t any all-year-round jumps racing in this era and considerably less jumps races annually than there are now. Nowadays Scu spends more of his time as a racing pundit and commentator as well as sharing his insider knowledge for online betting sites where you can get horse racing tips from a real expert with real racing contacts and unique betting insights.

Peter Scu was in the saddle when trainer Martin Pipe landed some of his biggest betting coups too. Strands of Gold taking the 1988 Hennessy Cognac Gold Cup by six lengths immediately comes to mind.

But that does not compare to how Olympian was laid out by the Pipe-Scu combination who together got Olympian into the 1993 Coral Cup carrying a feather-weight 10st. The horse duly landed a colossal ante-post betting plunge making all to spread-eagle 14 rivals at an SP of 6/4. Just four days later the horse took care of another 20 rivals when taking the Coral Cup at the Cheltenham Festival.

Seven years earlier Peter Scudamore landed connections some huge bets when taking the Triumph Hurdle at the Festival aboard Solar Cloud and doubling up on the same day with Charter Party in the Ritz Club Handicap Chase.

Like John Francome Peter Scudamore never won a Grand National or Cheltenham Gold Cup during his career but he did land two Scottish Grand Nationals and four Welsh Nationals.

The most memorable of those was his success aboard Carvills Hill in the 1991 Welsh National who was simply imperious in victory. However later that season in the 1992 Gold Cup he was victim of a ‘spoiler’ and was pulled-up in one of the most controversial races in Cheltenham Festival history.

Once again bear in mind Festivals during this era were only three-day affairs with six races per day giving 18 races in total. In the modern day the Cheltenham Festival is made up of 28 races over 4 days.

Miinnehoma was one of Peter Scudamore’s Cheltenham Festival winners taking the Sun Alliance Chase in 1992 but the champ missed the winning ride on him in the 1994 Grand National having retired.

Likewise the champion jockey could have ridden Little Polveir in the 1989 Grand National (after partnering him to victory in the 1987 Scottish National) if it were not for his transfer from trainer Jimmy Edwards to Toby Balding a month before the big race.