Biemme Special Cars will be offering to funeral homes around the globe this luxury Rolls Royce Phantom hearse for those wanting there final journey in style. This new funeral car has been stretched to a total of 276-inches (23-feet) in length, thats three feet longer than the extended wheelbase version of the Phantom.

But despite its long length, the car remains a 4-door, and even features the inappropriately – or humorously, whichever way you look at it – named “suicide” doors.

The world’s most expensive funeral car gets its power from a Rolls-Royce 6.75-litre V12 engine, with a self-leveling air suspension, while the car is made entirely from aluminum with over 600 assembled parts and over 650 feet of welding. 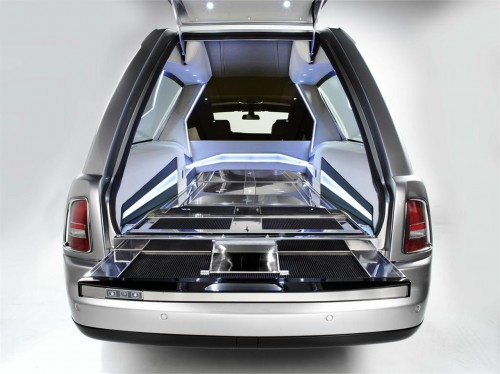 Funeral homes looking to set themselves apart from their competitors will be able to order the Rolls-Royce Phantom Hearse, but it won’t come cheap.

Would you choose the Rolls-Royce Phantom Hearse as your last ride? While your deciding check out the Rolls Royce funeral car gallery below.