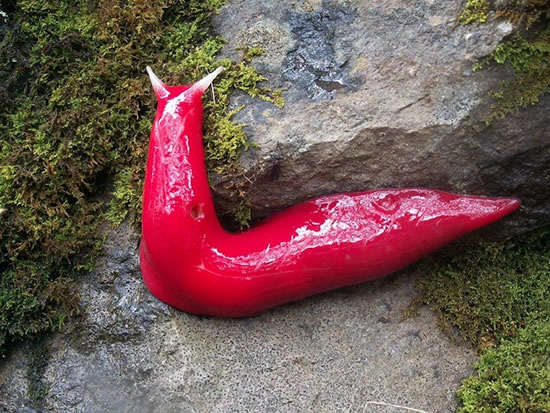 High on the dew-dampened peak of Mount Kaputar, in New South Wales, Australia, there exists a world distinct unto itself, an alpine forest populated by organisms found nowhere else on the planet. There, in that isolated mountaintop ecosystem, only a lucky few have chanced upon its most colorful inhabitant — this giant, fluorescent pink slug.

Michael Murphy, a ranger with the National Parks and Wildlife Service, was one of the first to get an up close look at this remarkable creature, which was only identified just recently.

“Giant pink slugs are about 20 cm long (7.8 inches), only found on top of Mount Kaputar,” says Murphy in an interview with Australian Broadcasting Corporation. “On a good morning, you can walk around and see hundreds of them, but only in that one area.”

“As bright pink as you can imagine, that’s how pink they are,” he added, noting that each night they crawl up trees in large numbers to feed on mold and moss.

But giant pink slugs aren’t the only squishy inhabitants unique to that particular mountaintop. According to Murphy, the forest there is also home to several cannibal snails, battling it out in slow-motion to see who can eat the other first.

“We’ve actually got three species of cannibal snail on Mount Kaputar, and they’re voracious little fellas,” says Murphy. “They hunt around on the forest floor to pick up the slime trail of another snail, then hunt it down and gobble it up.”

Scientists believe that the distinct biodiversity of this particular region are living relics from a bygone era, when Australia was lush with rainforests, connected to a greater landmass called Gondwana. As volcanic activity and other geological changes over millions of years transformed the landscape into one more arid, Mount Kaputar and its inhabitants were spared.

As a result, such unique invertebrates that might have dried out to extinction remain alive today, tucked away in a world all their own — and that’s just how Murphy prefers it:

“It’s just one of those magical places, especially when you are up there on a cool, misty morning.”

Have you ever met a giant slug?