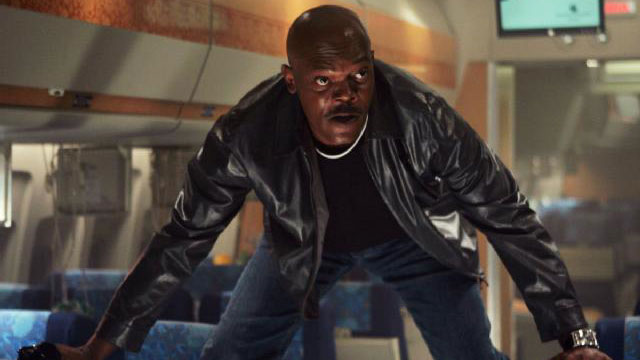 Check out these 32 fun movie facts that you probably don’t know.

1. Die Hard originated from the failed script of Commando 2.

2. Samuel L. Jackson demanded that the studio keep Snakes on a Plane as the title because it was the only reason he accepted the role.

3. Rather than use CGI, Tim Burton had 40 squirrels trained to crack nuts for Charlie & The Chocolate Factory.

4. Katherine Hepburn only drank water throughout The African Queen production as a protest against John Huston and Humphrey Bogart’s alcoholism. However, most of the cast and crew became sick from the water and only Bogart and Huston were unaffected because they only drank whiskey.

5. Neither Michelle Rodriguez nor Jordana Brewster had drivers’ licenses or even learners’ permits before production of Fast and the Furious.

6. In National Treasure, the good guys in the movie use Google and the bad guys use Yahoo!

7. Django Unchained is the first time in 16 years that Leonardo DiCaprio didn’t get the top billing.

8. Ryan Gosling was cast as Noah in The Notebook because the director wanted someone “not handsome.”

9. For LOTR: Return of the King, Elijah Wood had Alka Seltzer tablets in his mouth so he’d foam when Shelob stabbed him.

11. The director of Star Trek II: Wrath of Khan had to wear William Shatner out by doing multiple takes until he’d get tired enough to start actually acting. Extra clarity here.

12. In Halloween, Michael Myers’ mask is actually a Captain Kirk mask which was altered for the film. It was purchased for less than $2.

13. In Iron Man/Avengers, J.A.R.V.I.S is an acronym for “Just A Rather Very Intelligent System.” Side note — the voice of J.A.R.V.I.S, Paul Bettany, recently admitted he has never seen any Iron Man or Avengers film.

16. The pile of excreta that the young Jamal jumps into in Slumdog Millionaire was made from a combination of peanut butter and chocolate. Delicious.

17. Josh Hutcherson read the entire Hunger Games trilogy in five days to prepare for his role as Peeta.

18. After Top Gun was shown in cinemas, recruitment into the Navy by young men went up by 500 percent.

19. In total, Daniel Radcliffe went through 160 pairs of prop glasses by the end of the Harry Potter series.

20. Charlie Sheen stayed awake for 48 hours to achieve a suitably wasted look for his cameo as a drugged-up felon in Ferris Bueller’s Day Off.

21. In 2002, Steven Spielberg finally finished college after a 33-year hiatus. He turned in Schindler’s List for his student film requirement.

22. The voice actors of Mickey Mouse and Minnie Mouse from the 1930s got married in real life.

23. Ewoks are never referred as Ewoks in Star Wars: Return of the Jedi.

24. In the scene in Alien when the alien comes out of John Hurt’s stomach, the actors were not actually told it was going to happen. It shows.

25. Martin Scorsese’s Hugo was the director’s first film in twelve years not to feature Leonardo DiCaprio.

27. Pierce Brosnan was contractually forbidden from wearing a full tuxedo in any non-James Bond movie from 1995-2002.

28. Walt Disney refused to allow Alfred Hitchcock to film at Disneyland in the early 1960s because he had made “that disgusting movie Psycho.”

29. Pumbaa in The Lion King was the first character to fart in a Disney movie.

30. Steven Seagal was choked unconscious on a movie set by “Judo” Gene LeBelle, and Seagal shit himself.

31. Peter Ostrum, Charlie from Willy Wonka and the Chocolate Factory, never acted in another movie after that and is now a veterinarian.

32. Fox passed on The Watchmen because they thought the script was “one of the most unintelligible pieces of shit they had read in years.”

33. In Drive, when Ron Pearlman is getting beat up on the beach, he actually does shatter his kneecap, and his screams of pain are real.

34. The lineup in The Usual Suspects was originally meant to be serious, but Benicio del Toro couldn’t stop farting so they laughed throughout.