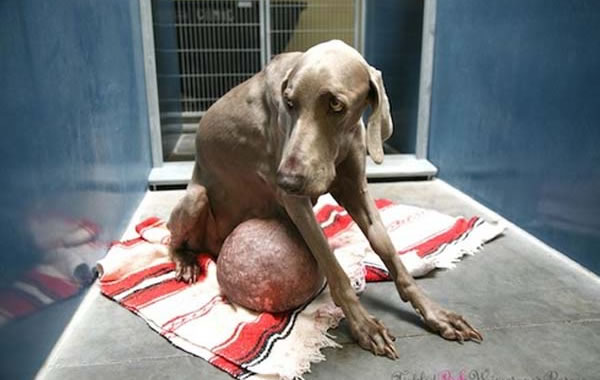 Dog adoption please see through the heart breaking images to reach the end of this wonderful story which will make you cry with happiness in the end! 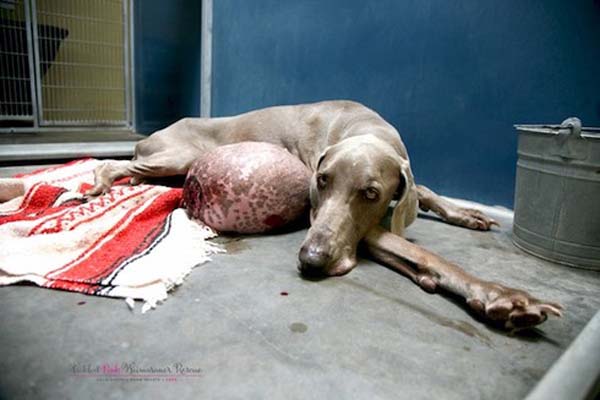 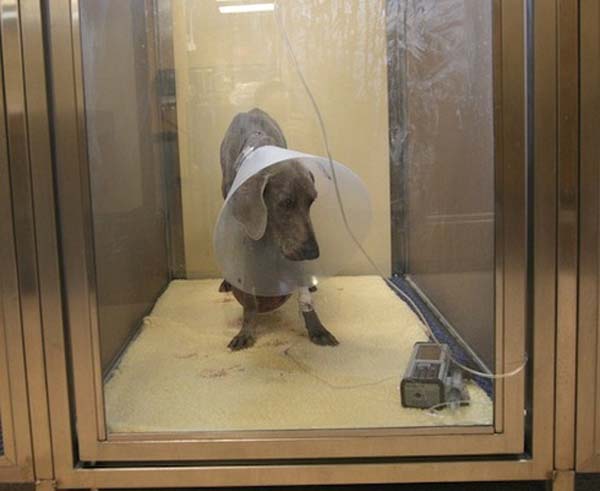 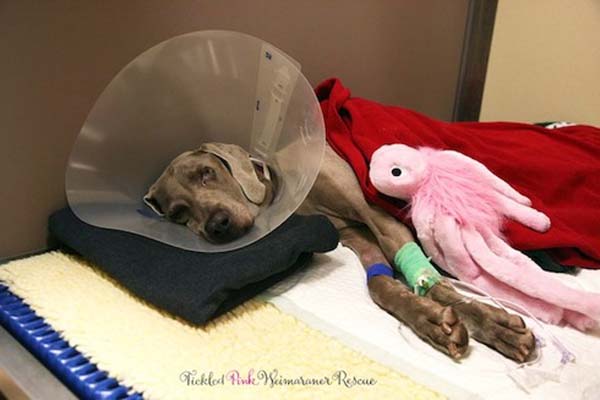 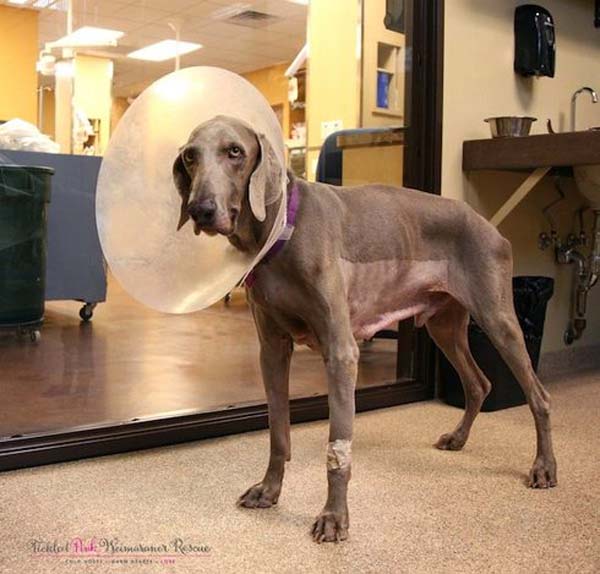 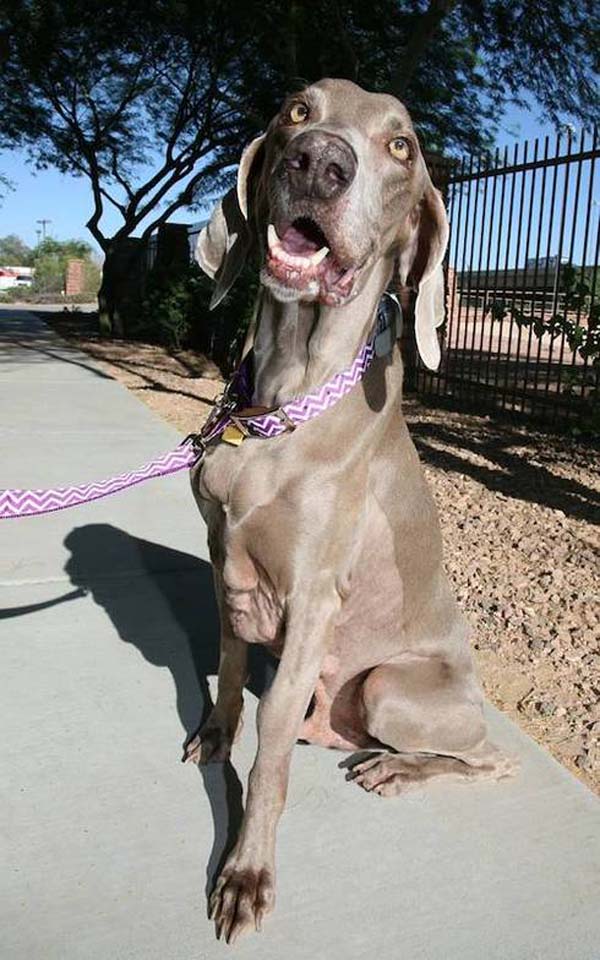 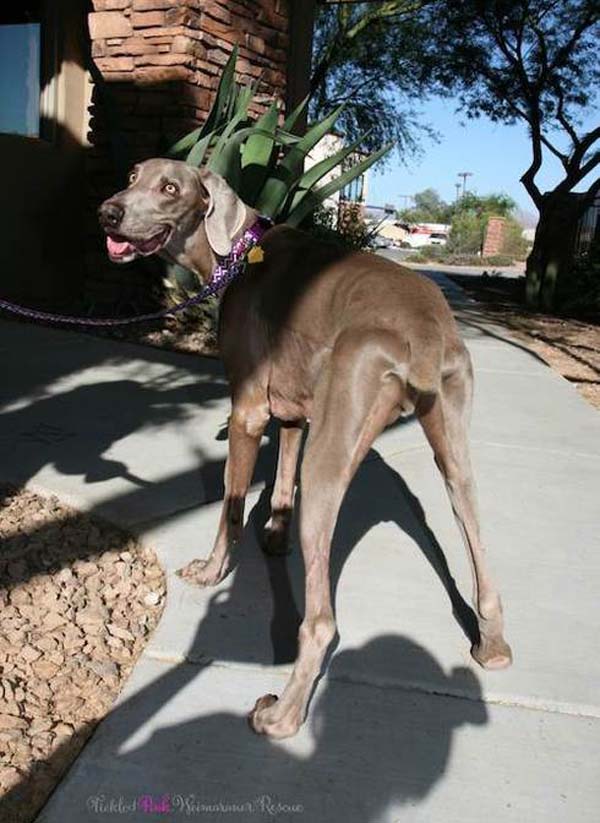 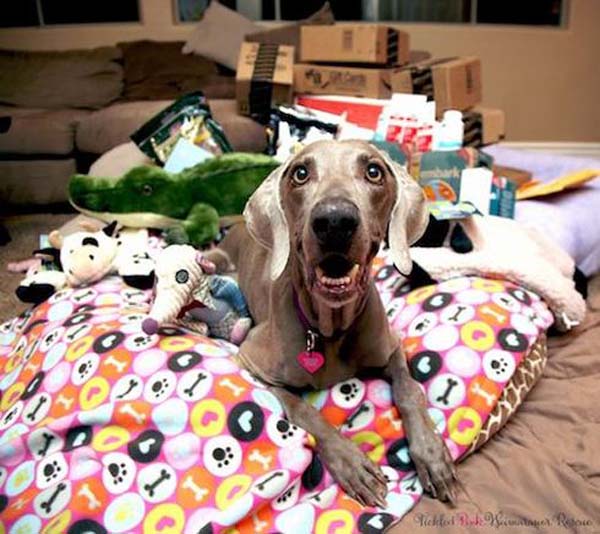 When Tickled Pink Weimaraner Rescue was called about a Weimaraner on death-row at a high-kill shelter, they immediately went to his aid. When they arrived, they were shocked to see a dog with a tumor on his underbelly that was so monstrous the dog could barely stand.

They named him Gilbert Grape. How he managed to survive as long as he did, and how someone could have neglected treating him medically for so long, remains a mystery. Keri Pink, Media Relations volunteer at Tickled Pink Weimaraner Rescue (TPWR), shared Gilbert Grape’s rescue story with DogHeirs. She recounts how the stray was saved and has begun his journey back to health.

Keri writes: “On a typical Arizona summer day where temperatures exceed 95-degrees, a male Weimaraner was picked up as a stray by the local animal control officers and taken to the county’s high-kill shelter. He was carrying a gigantic, infected tumor, a mass so large he could hardly stand or walk. The dog was placed on the concrete floor of the shelter’s isolation wing, where dogs await their death due to illness or aggression.”

“The shelter’s policy for strays is to hold the animal without vetting for 72 hours to give an owner a chance to reclaim, but the county has a program where they will allow pre-approved, federally recognized rescues to take animals in under a medical clearance.”

“We named him Gilbert Grape, for the monstrous grape-shaped tumor hanging from his chest. And so, Gilbert Grape was immediately taken to a 24-hour specialty vet hospital, where it was determined that he needed blood transfusions and stabilization by way of intravenous catheter if their surgeon could attempt a life-saving procedure to remove the tumor.”

“The diagnostics, stabilization, and surgery were estimated at about $7,000. Trying to save the dog’s life was a fast forward-moving decision without hesitation for rescue volunteers and veterinary staff. In rescue, however, there’s a fine line between what a private individual would be expected to do in order to provide life-saving treatment for their animal and what a dog just entering rescue can and should be put through. Private owners make decisions for their pets at their own discretion, while rescues depend on the support of the public.”

“Gilbert’s health history and actual age were unknown, although his blood work was relatively normal (with the exception of high white blood cell count from the infected tumor); his estimated age was about seven.”

“Tickled Pink Weimaraner Rescue saw a light in Gilbert’s eyes and wanted to give him a chance, but we knew we’d need financial support from the public.”

“So, we consulted multiple veterinarians and surgeons to make a decision that was best for the dog and his future. We started a fundraiser, explained to our Facebook fans the situation, and support by way of financial donations started pouring in.”

“Gilbert breezed through surgery and recovered without complication in the ICU. He left the hospital two days later for a qualified foster home, and has been blossoming since.”

“A week after Gilbert’s surgery, the pathology report on his more-than 12-pound tumor came back, stating that the mass was nothing more than just a benign lipoma. Gilbert was declared 100% cancer-free.”

“The staples in his chest from surgery were removed at his re-check appointment and he was given a clean bill of health. That said, while carrying the tumor for what veterinarians believe could have been a year or more, Gilbert suffered muscle loss and bodily strain due to compensation.”

“He is quite ataxic in his back legs and has very little muscle mass anywhere. His center of gravity is off and he stumbles when he walks.”

“Gilbert soon begins a physical therapy program which will include physical manipulations, massages, and water therapy. While he is physically still quite weak, his sweet, silly personality presents itself to his foster dad more openly with each new day.”

“Gilbert’s story reached many people, and so likely several adoption applications have been accepted. While he is not quite ready for an adoptive home quite yet, his future is certainly looking very bright.”

Dog Adoption Story Will Make You Cry With Happiness