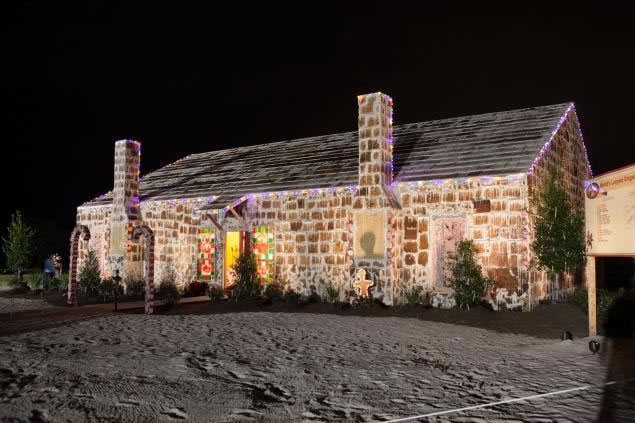 The idea for the decorated gingerbread house first came to Bill Horton, managing director of the Traditions Club, in September 2012. He was watching a Food Network special on gingerbread houses at the time. At first he thought he could get the house done by November, but soon realized that it would take a lot more work. That’s when the project got postponed to this year.

“Everybody got excited that we were trying to do this,” he said. Ninety percent of all the raw materials were donated – from lumber to electrical supplies to ingredients. Lots of people volunteered too. Club members, bakers and locals joined hands to create the home.

They made the exterior of the decorated gingerbread house entirely with ginger bread and icing, using 816kg of butter, 7,200 eggs, 3266kg of flour, 1361kg of brown sugar and 22,304 lollies. Horton said the house has everything except indoor plumbing. “It was a lot of fun and had a lot of challenges.”

“Being in Texas, we had some challenges building outdoors,” Horton said. “We had some high humidity and had to reduce the amount of butter we used to make it harden up. Now we’re facing a big winter storm, and I’ve tossed and turned all night about how to cover it.”

Horton didn’t really have to eat the house to prove it’s real, though. The bees swarming around it are proof enough. The exterior of the house requires daily maintenance, especially the parts where the heat has melted some of the candy. The club has had to call in a beekeeper, who spotted a cluster of about 2000 bees.

Visitor fees are $2 for children and $3 for adults. Several people have made generous donations too, raising the total collections to $150,000 in the first week.

If you’re watching your weight this Christmas, you probably don’t want to make a trip to this house. The 36 million-calorie structure is bound to rekindle your cravings!