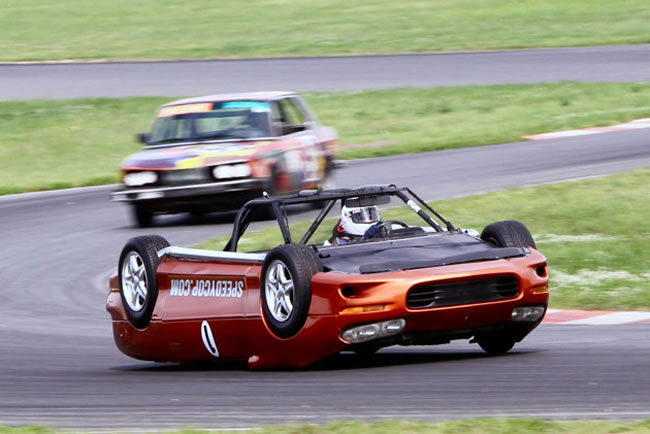 Jeff Bloch stunned racegoers recently as he turned up to race in his custom upside down race car. The vehicle is a combination of two cars and looks like it is scraping itself along the road on it’s roof.

Jeff made the unique motor by putting the upside-down shell of a gutted Chevrolet Camaro onto a smaller Ford Festiva.

The car looks like it is scraping itself along the road following a terrifying crash but there is just enough clearance for its hidden wheels to drive around the track. 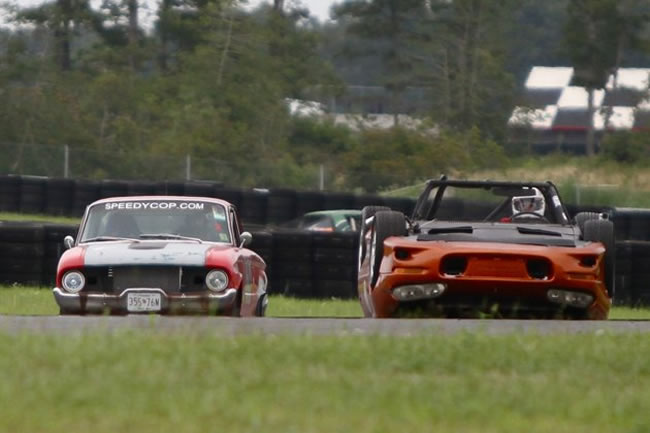 Off-duty police officer Jeff said he wanted a vehicle which would ‘make people do a double-take’ when he unveiled it at the off-beat ‘LeMons’ race series.

The cut-price competition sees endurance racers driving around the circuit in a series of budget motors where the wackier is seen as better.

And after racing a converted plane, Jeff has just completed his most ambitious effort yet – this bizarre upside-down race car.

Jeff, from Maryland, USA, said: ‘I specialize in driving wacky race cars in LeMons, I have raced a pink Cadillac and a plane car.

‘This time I went for something that would make people do a double take, for people to think I had rolled the car.

‘The drivers, stewards and spectators kept telling me they had a momentary panic and thought ‘oh no, he’s crashed, which is what I wanted.

‘There were bewildered looks, broad grins, and plenty of laughter. Everyone loved it.’

Jeff raced the Upside Down car for the first time over the weekend at the New Jersey Motorsport Park. 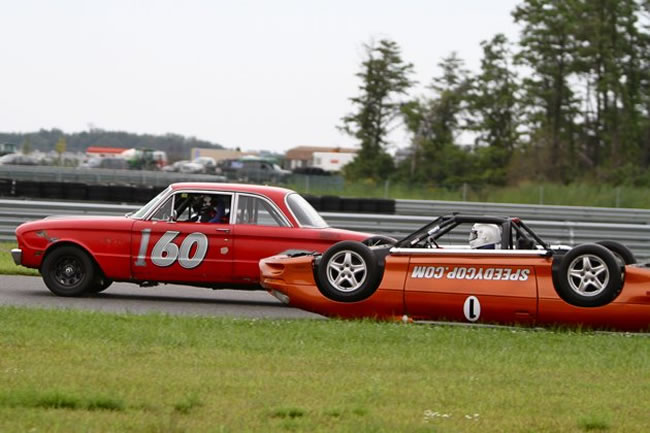 There was no Chevy Camaro V8 engine to power the car, instead the power was coming from a tiny 1.3-litre unit which developed just 60bhp when the Ford Festiva was new in 1990.

This meant, with the added 300kg of the Camaro body, the car was only capable of around 85mph so while it was winning in the comedy stakes, it was towards the bottom of the leaderboard.

Jeff added: ‘I wanted to create something unique, something no one had ever done before.

‘Other than a clutch failure which we fixed, nothing went wrong. The car was slow though and there was no working speedo.

‘It was probably capable of about 85mph but was a blast to drive, every time you tried to push the car it was all over the place, it was like a white knuckle ride.’