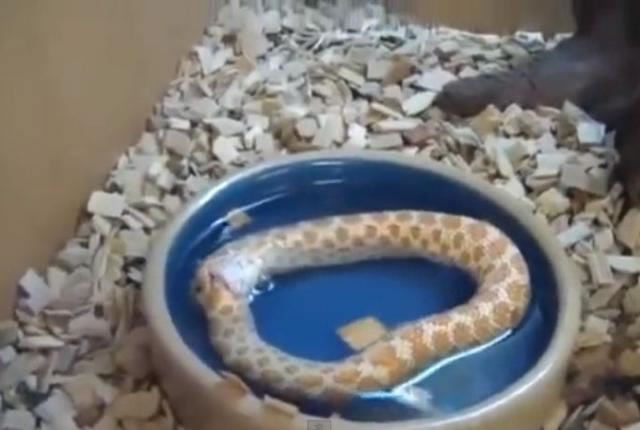 Watch this insane video of a crazy snake that starts swallowing his own tail and tries to eat himself. I guess the saying “you are what you eat” takes on a whole new meaning when your own tail is what’s on the menu.

In 2009, Bob Reynolds of Sussex was horrified to discover his pet king snake, Reggie, “chomping down on his back end.” According to the vet who attended to the crazy snake, “I’ve never seen a case like it, although I have heard about it happening.” Fortunately, after 30 minutes of gently freeing Reggie’s teeth, the serpent’s tail was saved before digestion had set in.

What could’ve driven an animal to devour itself in the first place? In Reggie’s case, this culinary mishap wasn’t too far off from his species’ usual diet. King snakes (Lampropeltis getula) frequently consume smaller snakes including poisonous rattlers, so it’s likely that the critter mistook his wriggling hindquarters for a potential prey item.

This crazy snake may have survived his ordeal, but at least one other specimen didn’t live to tell the “tail.” In The New Encyclopedia of Snakes, herpetologist Joseph C. Mitchell writes:

The most bizarre accounts of snake feeding behavior have to be those of American rat snakes, Pantherophis obsoletus, that have been observed eating themselves! One individual, a captive, did this on two occasions and died at the second attempt. The other individual was wild and was in a tight circle, having swallowed about two thirds of its body, when it was found.

[BONUS ARTICLE – How To Survive An Anaconda Attack]