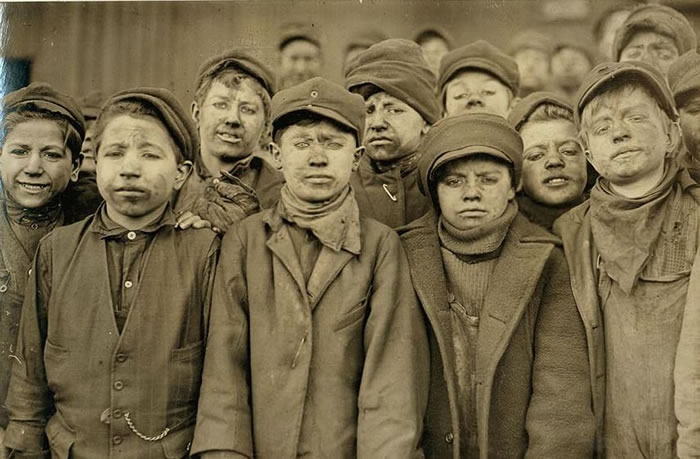 Child labor facts: in America child labor was not eliminated until 1938 take a look at these heart breaking pictures from the early 20th century. 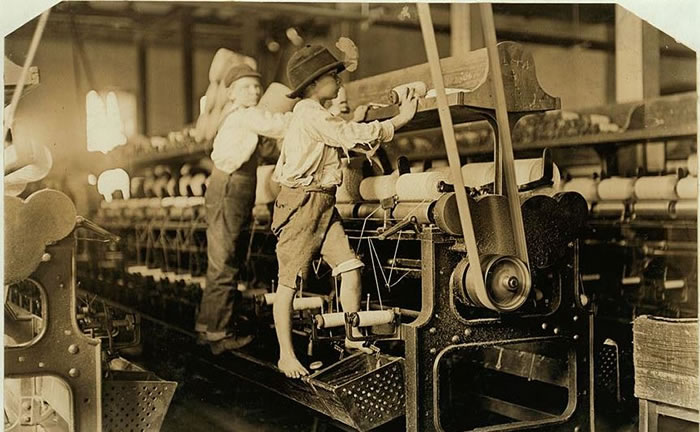 Youngsters at Bibb Mill No. 1, 1909 Some boys were so small they had to climb up on the spinning frame to mend the broken threads and put back the empty bobbins. Location: Macon, Georgia. 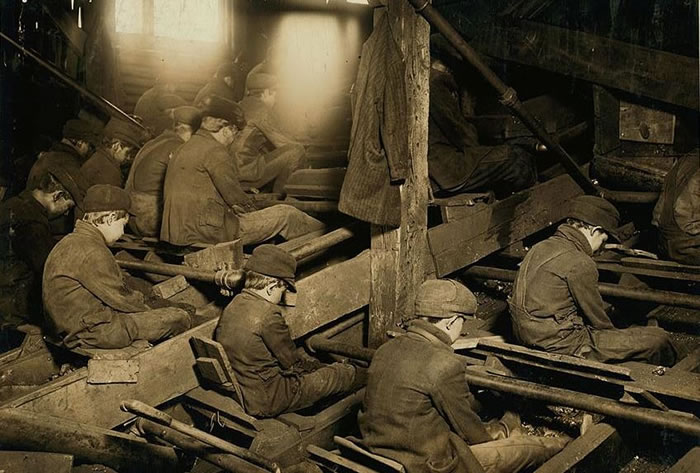 Pennsylvania Breakers The dust was so dense at times as to obscure the view. This dust penetrates the utmost recess of the boy’s lungs. Location: South Pittston, Pennsylvania. 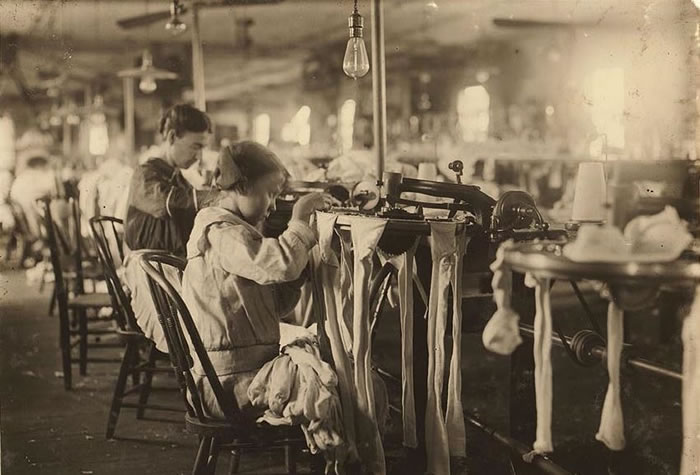 11-year-old at Crescent Hosiery Mill Nannie Coleson, looper who said she was 11 years old, and has been working in the Crescent Hosiery Mill for some months. Makes about $3 a week. Has been through the 5th grade in school. She is bright, but unsophisticated. Told investigator, “There are other little girls in the mill too. One of them, says she’s 13, but she doesn’t look any older than me.” Location: Scotland Neck, North Carolina. 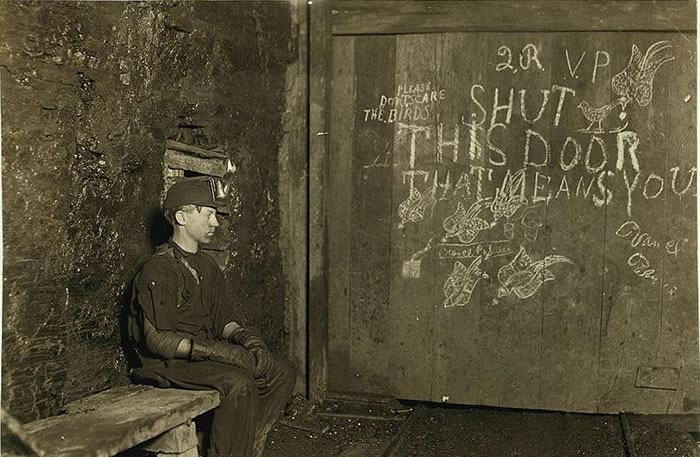 Vance, a Trapper Boy, 15 years old Has trapped for several years in a West Va. Coal mine. $.75 a day for 10 hours work. All he does is to open and shut this door: most of the time he sits here idle, waiting for the cars to come. On account of the intense darkness in the mine, the hieroglyphics on the door were not visible until plate was developed. Location: West Virginia. 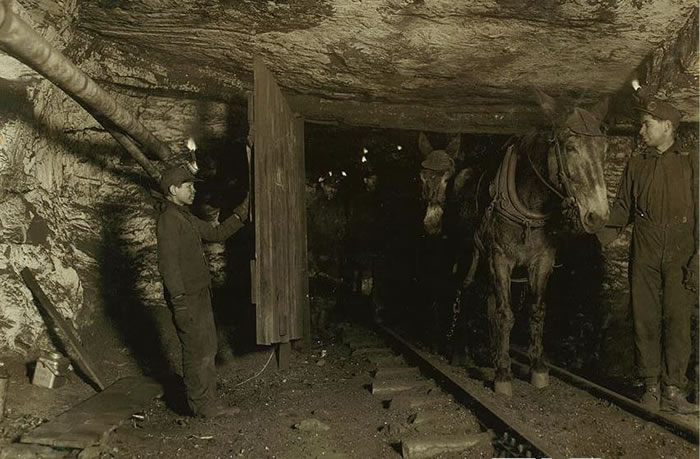 Willie Bryden, 13, holding the door open in a mine Waiting all alone in the dark for a trip to come through. It was so damp that Willie said he had to be doctoring all the time for his cough. A short distance from here, the gas was pouring into the mine so rapidly that it made a great torch when the foreman lit it. Willie had been working here for four months, 500 feet down the shaft, and a quarter of a mile underground from there. (Shaft #6 Pennsylvania Coal Co.) Walls have been whitewashed to make it lighter. January 16th, I found Willie at home sick, His mother admitted that he is only 13 yrs old; will be 14 next July. Said that 4 mos. ago the mine boss told the father to take Willie to work, and that they obtained the certificate from Squire Barrett. (The only thing the Squire could do was to make Willie out to be 16 yrs old.) Willie’s father and brother are miners and the home is that of a frugal German family. Location: Pittston, Pennsylvania. 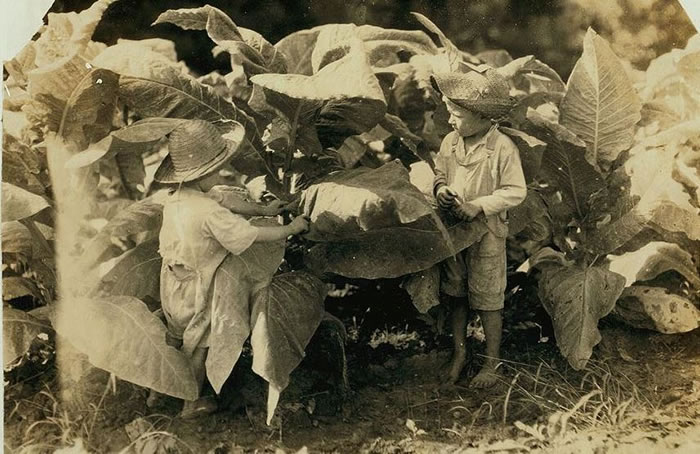 Amos, 6, and Horace, 4 years old, in Tobacco Fields Their father, John Neal is a renter and raises tobacco. He said (and the owner of the land confirmed it) that both these boys work day after day from “sun-up to sun-down” worming and suckering, and that they are as steady as a grown-up. Location: Warren County –Albaton, Kentucky 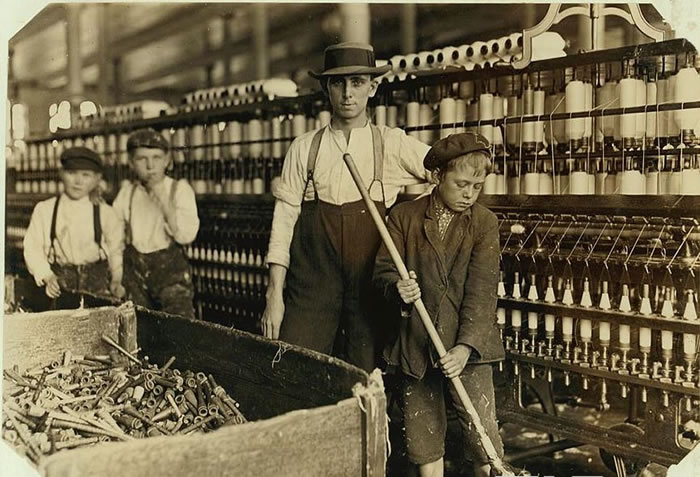 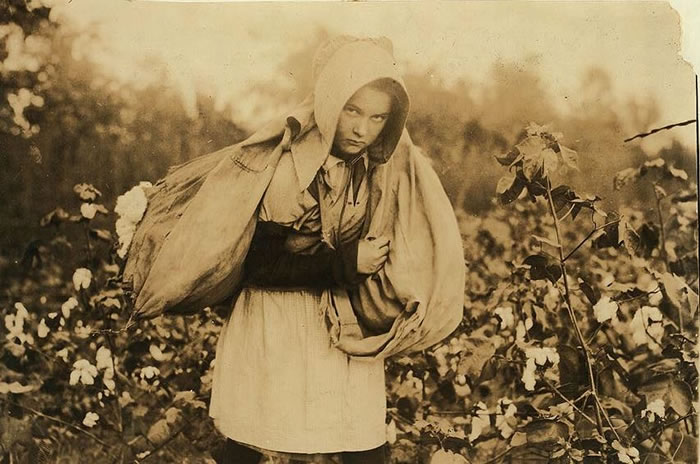 11-year-old Callie Campbell picking cotton Callie Campbell, 11 years old, picks 75 to 125 pounds of cotton a day, and totes 50 pounds of it when sack gets full. “No, I don’t like it very much.” Location: Potawotamie County, Oklahoma. 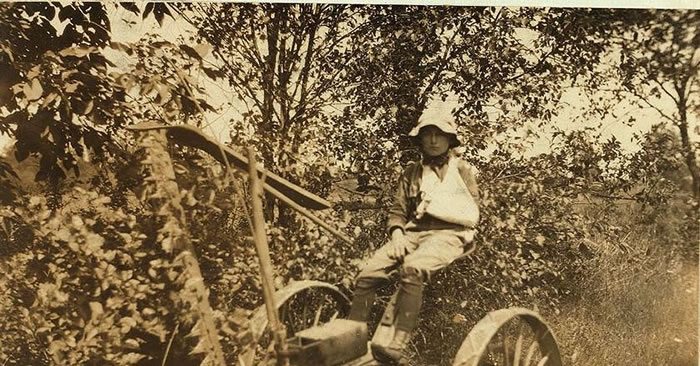 12-year old who lost his hand Rural Accident. Twelve-year old Clinton Stewart and his mowing machine which cut off his hand.

As hard as things might seem right now for high school or university students entering the job market, it’s probably nothing compared to what these kids had to go through in early 1900s America. This child labor facts photo series, archived by the Library of Congress, shows what conditions were like for child laborers before child labor was largely eliminated in 1938.

The child labor facts photo series, taken by photographer Lewis Hine on behalf of the National Child Labor Committee, illustrates the dangers and hardships working children were subject to, especially in dangerous work where the modern safety equipment we’re used to was not yet available. The kids, some as young as 4, worked in factories, mines, plantations and textile mills. Children in coal mines inhaled damaging dust daily, while those working in canneries or textile mills could lose fingers. Many skipped school or didn’t do their homework so that they could work.

Today, child labor is largely a thing of the past in the U.S., although exceptions do remain allowing for children to work in agriculture, show business, and for their parents. It has been largely eliminated elsewhere in the world as well, although child labor, primarily through the children’s parents, still has a high rate of occurrence in the developing world. With photos like these, it kind of makes me feel bad about complaining when my mom made me sweep the house or take out the garbage.