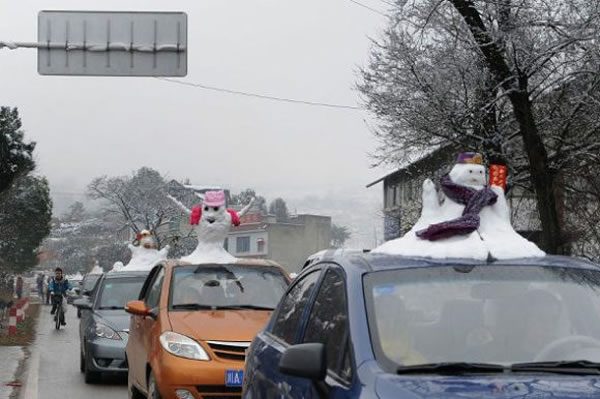 Two Chinese men have hit the jackpot after coming up with a cool car decorative accessories idea. The duo are making the most of the heavy snowfall and selling snowmen for car roofs.

Apparently, people will buy anything if you sell it right.

The two men (we don’t know their names or who they are), make snowmen for cars in the suburb of Chengdu, in Southwest China’s Sichuan province. A photograph taken on 10 February shows them placing snowmen with orange eyes, noses and buttons, on top of a customer’s car. 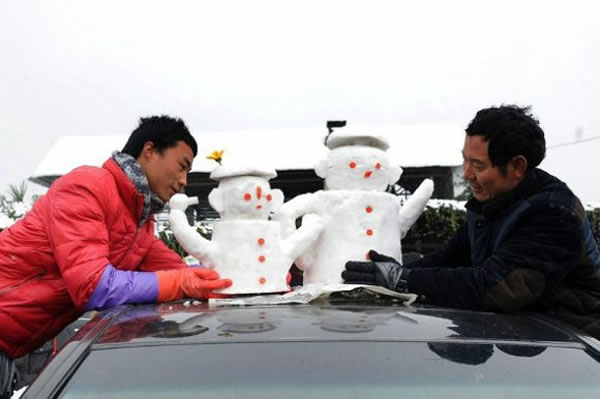 According to some reports, they had sold over 100 snowmen before noon that day. Other pictures show several cars lined up in a street, all sporting snowmen on the roof. It certainly made for a festive display. It was as though the frozen figures were cheering on the traffic.

Some believe that the snowmen were being sold only to tourists – as a marker for robbing them later. We’re not sure how much truth there is to that story. But for $5 per snowman and$10 if you want one shaped like a horse, I do think they were being robbed all right. 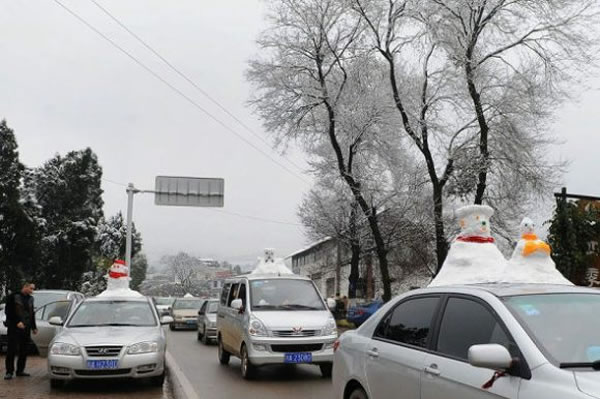 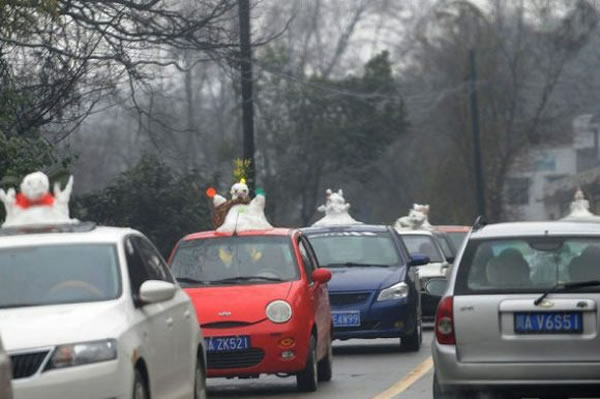 Would you like one of these snowmen car decorative accessories?

The first documented snowman dates to the year 1380! That ancient snowman appears as a marginal illustration in the “Book of Hours,” a Christian devotional book that was discovered in the Netherlands. Since then snowmen have become iconic in societies that experience snowfalls.

Snowmen are the center of numerous illustrations, fables and even songs. For example, “Frosty the Snowman” is a song that was recorded in 1950 and centers on the adventures of a snowman and the children who built him. Until this day, the song is hugely popular especially around Christmas.

Snowmen have also become the center of competitions such as those to see who can create the most unique snowperson (or snow creature). The world’s tallest snowman ever built was in Bethel, Maine, in 2008. She was named “Olympia” and she stood at 122 feet tall! This giant snowwoman had skis for eyelashes, tires for buttons, and arms made out of pine trees!

10 Car Custom Jobs That Are Over The Top