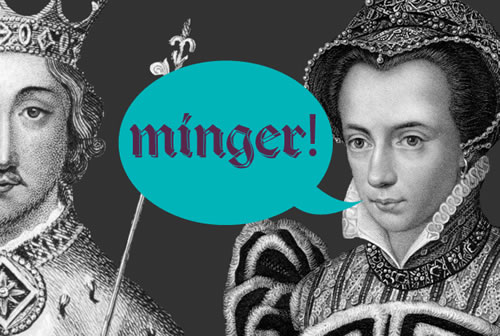 The British language has a slang for almost everything and many are insulting but do you know where some of these British insults slang words come from?

Wazzock was a particularly prevalent—and particularly loutish—insult in the 1990s. At the time, “lad culture” ran throughout British music and television, and wazzock, a North-England accented contraction of the sarcastic wiseacre (a know-it-all) became a powerful tool to shoot people down in an argument.

Though the etymology of lummox is heavily disputed, one thing is for certain: It came from East Anglia, the coastal outcrop of Britain above London. There, around 1825, someone threw out the word as an insult, and it stuck, becoming a typically British go-to term. Some linguists believe it comes from the verb lummock, which typified a lummox: it means a clumsy oaf.

Skivers and shirkers are one and the same. Someone who manages to duck under any responsibility and loaf around, doing very little, is a skiver. The origins of this particular insult are contested: some think it’s from an Old Norse word—skifa—meaning “slice,” whereby the worker slices off as much work as possible.

Often hurled at the opposite sex, to call someone a minger is to say they are objectively unattractive. Though etymologists struggle to agree where the word came from, it seems likely that it stems from the Old Scots word meng, meaning “sh**.” We didn’t say it was pretty.

For such a colloquial word, nincompoop actually has a very learned past. Samuel Johnson, the compiler of England’s first proper dictionary, claims the word comes from the Latin phrase non compos mentis (“not of right mind”), and was originally a legal term.

As words are used more regularly, the laziness of pronunciation can often warp them slightly. So it was with pillock. Originally pillicock (a Norwegian slang word for penis), the word has since been condensed to plain old pillock—though its meaning remains.

According to the brilliant Dictionary of the Vulgar Tongue, dating back to 1811 and compiled by Captain Francis Grose, a clod hopper refers to a country farmer or ploughman—with the implication nowadays that you’re slow witted and bumbling.

Grose’s Dictionary of vulgarities is a rich seam of overlooked insults. In the 200 years since it was published, there have been several terms that have fallen out of favor. One of them is dunaker, a common thief of cows and calves.

By calling someone a git, you’re invoking the old Scots word get, which means “bastard.” When it came down south of the border, it lost its harsh vowel sound and became something softer, albeit with the required spikiness in.

Do you know the origins of any British insults slang words?