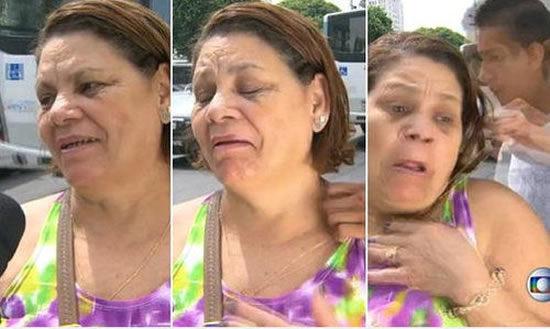 A Brazilian woman was recently robbed during a live TV interview while giving an interview on how crime is escalating out of control in Rio de Janeiro and what makes this more crazy is that it happened down the road from the Rio police headquarters.

When this Brazilian woman stopped on the street to speak to a reporter about the rising crime rate in the area, I bet she didn’t expect to give a live demo! As she was complaining on live TV about the incompetent police force, a thief ran up to her and attempted to snatch her gold necklace. The whole thing was recorded on camera – I’d call it downright hilarious if only it wasn’t so appalling.

The incident took place in broad daylight on a busy street in Rio de Janeiro. The video clip shows the Brazilian woman speaking to an interviewer from RJTV. Just a few seconds into the interview, a young boy hurls himself at the woman, snatches her necklace and runs across the busy street. The Brazilian woman yells in shock; the reporter’s reaction is instantaneous – he yells too, pushes the woman aside with his fist and attempts to chase the thief down.

Luckily, it is revealed that the thief didn’t grip the necklace very well – it’s still in the woman’s possession. She smiles sheepishly as she reveals the accessory, visibly shaken but apparently finding the whole thing very funny. I do wonder if the thief even realized what the woman was talking about when he decided to rob her. And to commit a crime while the camera was rolling – the kid had to be very brave or very, very foolish.

It’s no secret that Rio has one of the highest crime rates in the world. The favelas outside the main city are rife with gang and drug related crimes and with the World cup soon to kick things a re just getting worse in Brazil.