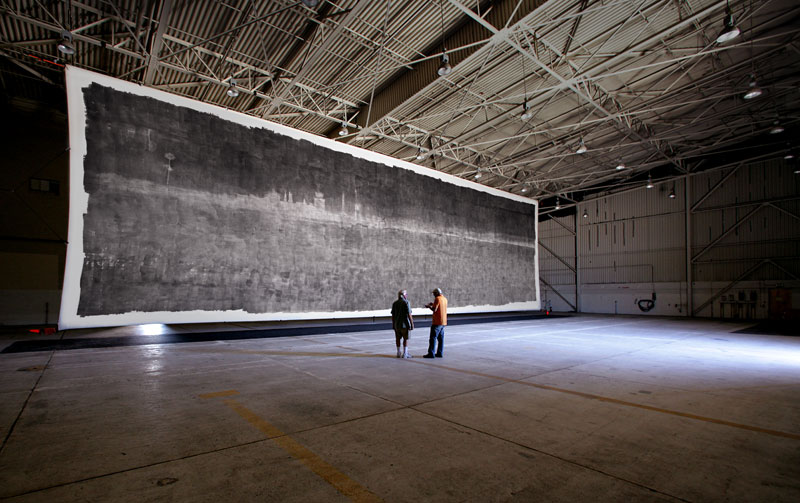 “The Great Picture” measures 107 ft wide by 31 ft high (32.6 m x 9.5 m) and holds the Guinness World Record for the largest seamless print photograph ever. The camera with which it was made also holds the record for being the world’s largest. 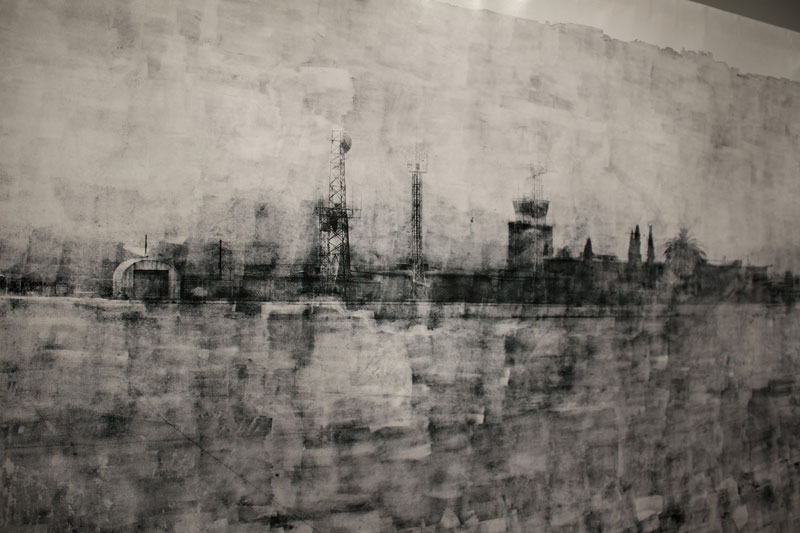 The single photograph was created in 2006 by a group of six artists—Jerry Burchfield, Mark Chamberlain, Jacques Garnier, Rob Johnson, Douglas McCulloh, and Clayton Spada—along with hundreds of volunteers.

They transformed an abandoned F/A-18 fighter jet hangar into a gigantic pinhole camera by darkening and sealing the interior from outside light. A pinhole, just under a quarter-inch in diameter (0.635 cm) was centered between the metal hangar doors to serve as the camera’s aperture.

Artists and volunteers lift the uncoated Great Picture muslin into place in the hangar-as-camera. 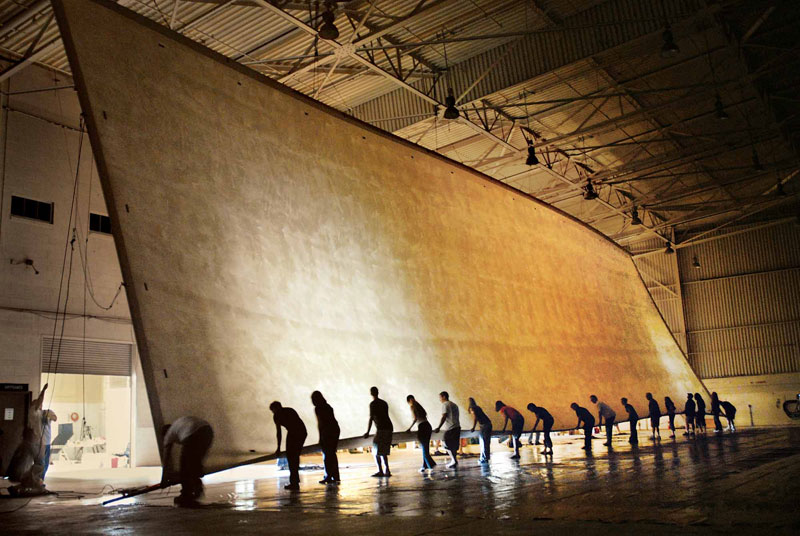 A seamless piece of muslin cloth was made light-sensitive by coating it with 21 US gallons (80 l) of gelatin silver halide and then hung from the ceiling at a distance of about 80 feet (24 m) from a pinhole, just under 6 millimetres (0.24 in) in diameter and situated 15 feet (4.6 m) above ground level on the hangar’s metal door. The distance between the pinhole and the cloth was determined to be 55 feet (17 m) for best coverage, and the exposure time was calculated at 35 minutes. 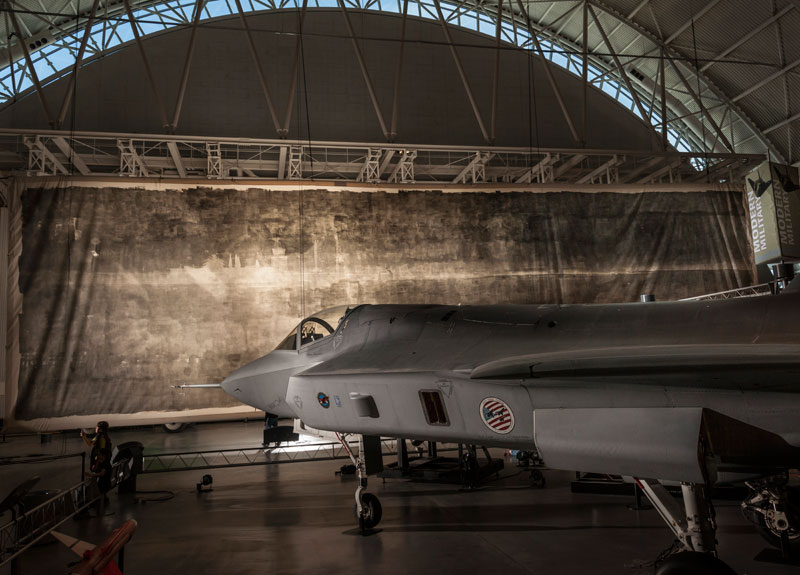 The hangar-turned-camera recorded a panoramic image of what was on the other side of the door using the centuries-old principle of “camera obscura” or pinhole camera. An image of the former El Toro Marine Corps Air Station with the San Joaquin Hills in the background, appeared upside down and flipped left to right on film after being projected through the tiny hole in the hangar’s metal door. 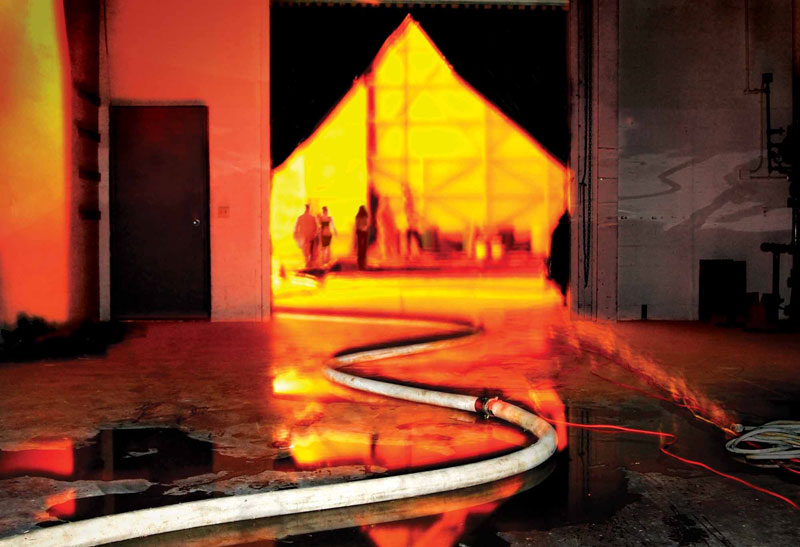 The opaque negative image print was developed by 80 volunteers during five hours in a vinyl pool liner custom tray, the size of an Olympic swimming pool, with 600 US gallons (2,300 l) of traditional developer and 1,200 US gallons (4,500 l) of fixer pumped into the tray using high volume pumps. The photograph was then washed using fire hoses attached to two fire hydrants (seen above). 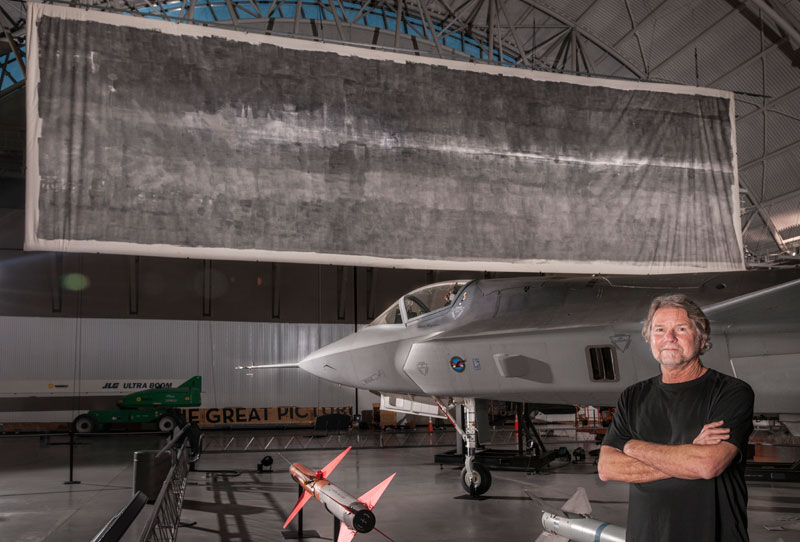 The Smithsonian National Air and Space Museum will exhibit the 3,375-square-foot Great Picture at its Steven F. Udvar-Hazy Center in Chantilly, Virginia from April 26 through November 2014.