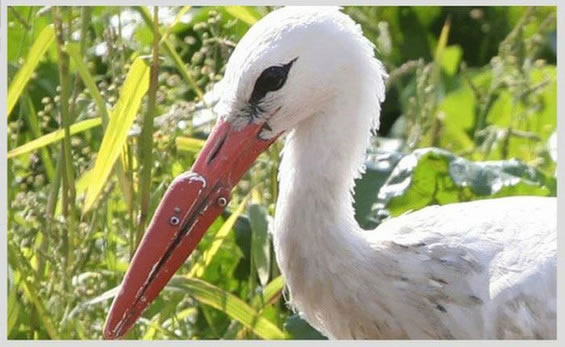 When you see pictures like these then it’s understandable why the word kind is in mankind! Take a look at these amazing prosthetic limbs for animals and see some of the good people do in the world.

It if wasn’t for people creating these prosthetic limbs for animals they probably would never have survived. 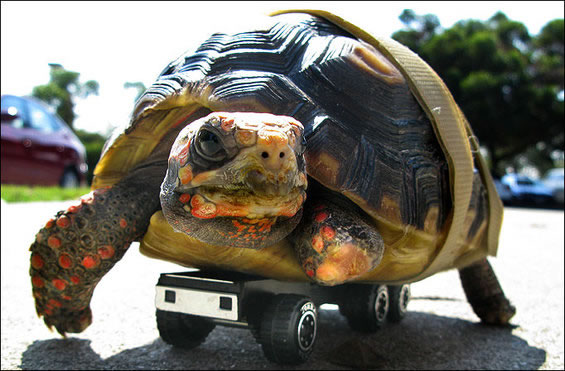 When this rescue tortoise was found in the Californian hills, her front left leg was in tatters. Vets were concerned she’d never move properly again, but one of her rescuers came up with a clever idea: toy car wheels that she is able to steer with her right leg. 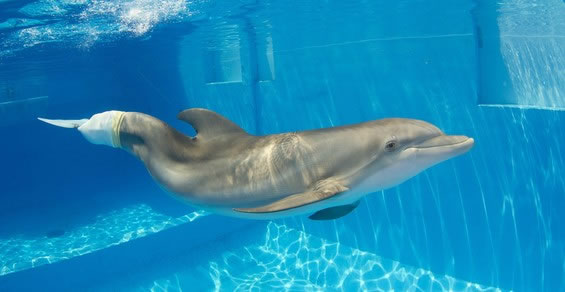 Winter was found off the coast of Florida, having been caught in a crab line trap. Her injuries were so bad that she lost two of her vertebrae and her entire tail. But thanks to expert prosthetics companies, vets and dolphin trainers, she swims using her new tail. Winter lives at the Clearwater Marine Aquarium and is even the star of her own film: Dolphin’s Tale. 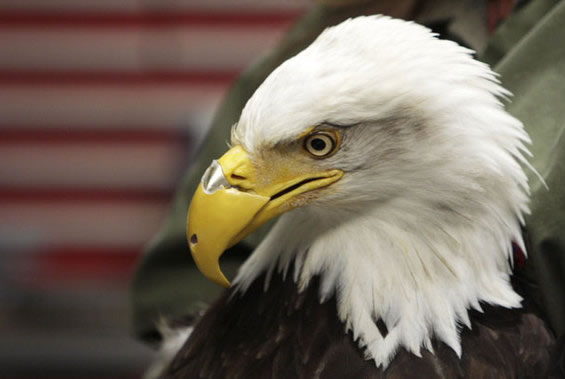 Beauty was found foraging on a rubbish tip, painfully emaciated. Closer inspection revealed that she’d been shot in the face and the top part of her beak had been blown off.

Initially, she was force-fed liquids through a tube, before being fed solid food with forceps. Many people thought Beauty should be put to sleep, but her rescuers refused to give up hope and eventually came across an engineer who, with the help of scientists, researchers and even his own dentist, designed and built Beauty’s new upper mandible. 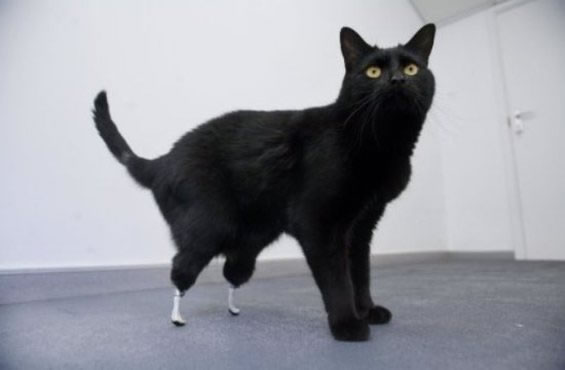 When Oscar the cat’s owners found him bleeding at the edge of a field, they realised he must have got caught in the combine harvester of a nearby farmer. He lost both of his legs and the outlook was bleak, but the family contacted someone they knew who made prosthetic limbs for dogs. He agreed to help and after a complicated operation, Oscar got his titanium limbs – and his owner even wrote a book about him. 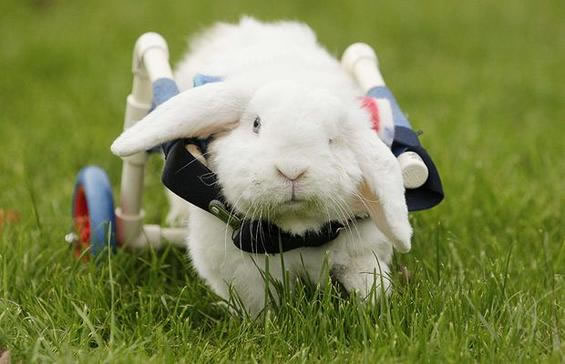 Ethel’s back legs became paralysed by a mystery illness, so her owner got online and found out about an American company that makes carts for disabled animals. She sent off Ethel’s measurements and ordered her wheels and says that the bunny now has a ‘new lease of life’. Ethel is the first rabbit in the UK to have her own custom-made chariot. 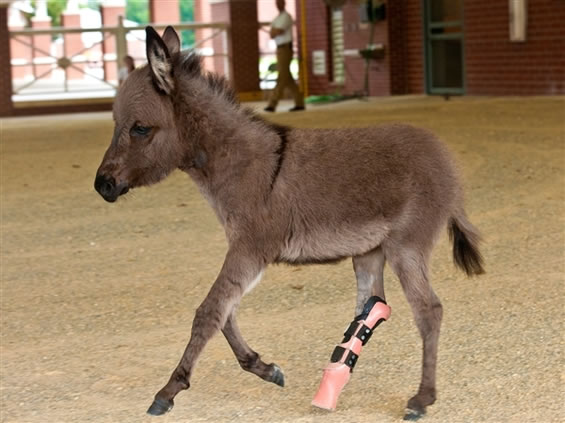 Emma was born with a deformed hind leg that had to be amputated shortly after she was born to allow her to stand. Now, thanks to a clinic that’s part of the same company that built Winter the Dolphin’s tale, she can run with the rest of the herd. Emma will need to have several of these prosthetic legs fitted as she grows into adulthood, but she is doing really well so far. 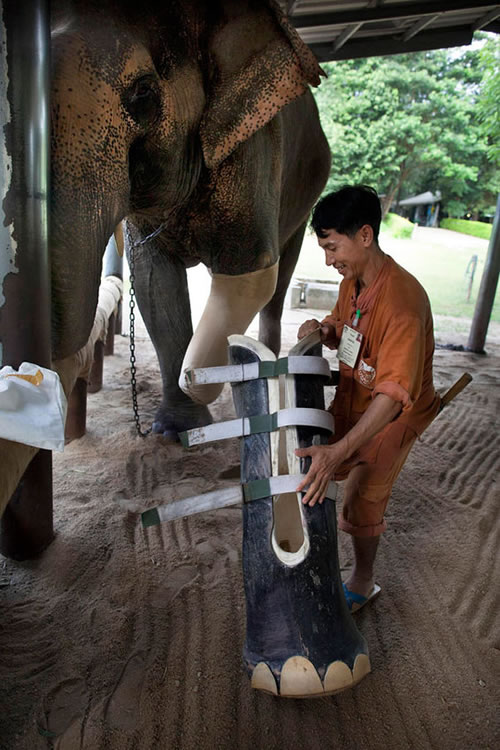 Motala was a working elephant who was seriously injured when she stepped on a landmine. In great pain, she endured a three-day trek to the elephant hospital, where vets told her owners she would have to have her leg amputated. Seven years later, thanks to the elephant hospital, Motala got her first prosthetic leg. She needs new legs as her weight changes, but currently, she’s got a more permanent one and is doing great – not bad for a three tonne animal. 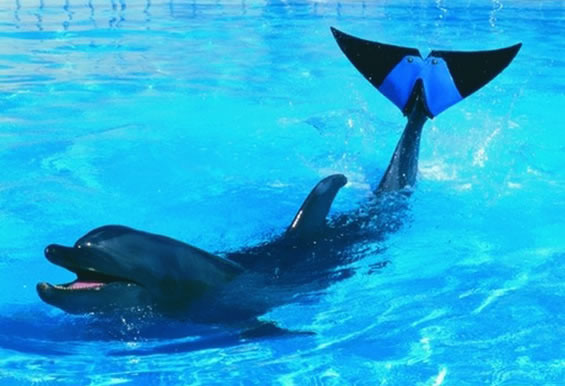 Fuji had to have 75% of her tail removed because it was being destroyed by a necrotic disease. Tyre manufacturer Bridgestone created a specially-designed tail made from silicone, rubber and carbon fibre. That was almost ten years ago and today, Fuji is thriving and can be seen at the Okinawa Churaumi Aquarium in Japan. 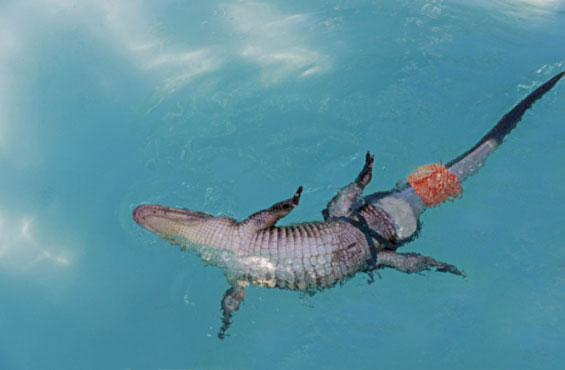 Mr Stubbs was rescued by the Phoenix Herpetological Society, Arizona, from the back of a truck packed with other gators. Sadly for him, his tail had been bitten clean off by one of his fellow passengers. Although Mr Stubbs survived, he couldn’t swim. That was until eight years later, when he was fitted with a special prosthetic tail which allows him to enjoy the water, as well as life on land.

Patch the guinea pig of Saffron Walden, Essex, UK, lost the use of its back legs. Six-year-old owner Helen Auty was extremely upset, until family friend Paul Scott, an engineer, stepped in to make the cavy a wheelchair. Using a toy car and a skating pad strap, he made patch mobile again. 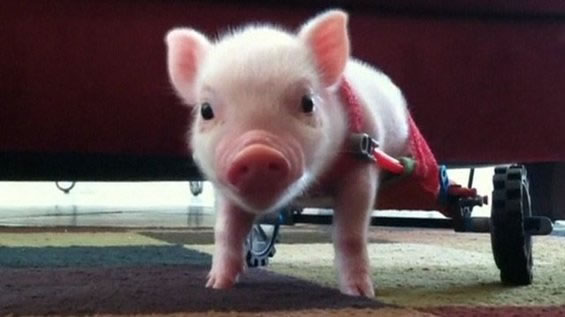 As if having an unfortunate name wasn’t bad enough, poor Chris was born without the use of his hind legs. When the piglet was just ten days old, American vet Len Lucero created this dog-style wheelchair to help him get around. He filmed Chris using it and it became a Youtube sensation. Chris is now doing excellently and even has his own Twitter account.

After being assaulted by a human being, poor Uzonka the stork had a badly broken bill. Experts at the Uzon Animal Hospital in Uzon, Romania, gave her five painstaking, preparatory operations before finally fitting her with this prosthetic, which allows her to eat and continue life as normal.