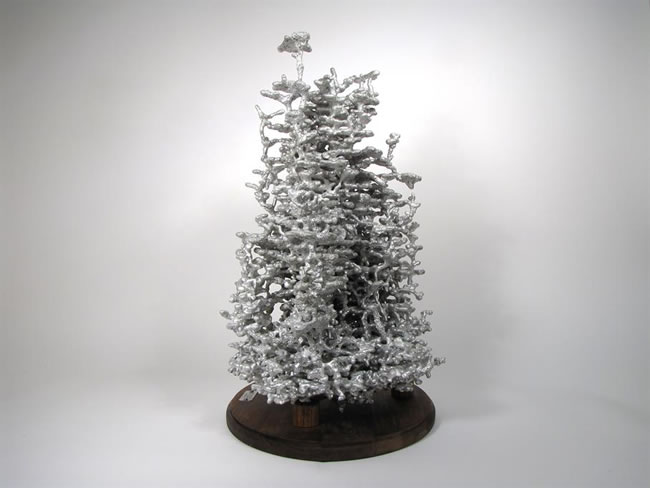 Watch this aluminum cast art sculpture being made. Molten aluminum is poured into a fire ant colony and the result is a huge sculpture weighing 17.9 lbs.

The nest belonged to red imported fire ants which are harmful to the environment and whose nests are exterminated by the millions in the United States using poisons, gasoline and fire, boiling water, and very rarely molten aluminum.


From Wikipedia: “Researchers have also been experimenting with extreme temperature change to exterminate RIFAs [red imported fire ants], such as injecting liquid nitrogen or pressurized steam into RIFA nests. Besides using hot steam, pouring boiling water into ant mounds has been found effective in exterminating their nests.”

The person who created this aluminum cast art sculpture claims to have at least 120 of these colonies within an area of approximately three acres.

This ant hill sculpture certainly looks organic, but would you have guessed that this was an upside-down ant hill? We think it looks a bit like a silvery Christmas tree.

Give us your thoughts on this aluminum cast art sculpture.

A typical fire ant colony produces large mounds in open areas, and feeds mostly on young plants, seeds, and sometimes crickets. Fire ants often attack small animals and can kill them. Unlike many other ants, which bite and then spray acid on the wound, fire ants bite only to get a grip and then sting (from the abdomen) and inject a toxic venom. For humans, this is a painful sting, a sensation similar to what one feels when burned by fire—hence the name fire ant—and the after effects of the sting can be deadly to sensitive people.

Although most fire ant species do not bother people they are an invasive pest in many areas of the world.

In the US the FDA estimates that more than US$5 billion is spent annually on medical treatment, damage, and control in RIFA-infested areas. Furthermore, the ants cause approximately $750 million in damage annually to agricultural assets, including veterinarian bills and livestock loss, as well as crop loss.