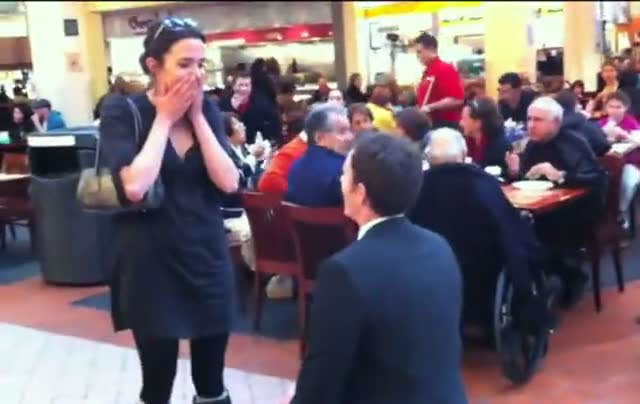 It’s not easy deciding how to pop the big question. You want it to be romantic, a surprise and perfect. But sometimes your partner may not feel as strong towards marriage as you do and if its a public proposal then it can end up being an extremely humiliating experience. Check out the most mortifying public proposals of all time:

You can literally feel thousands of fans in the stands cringe watching this poor guy get turned down by the woman of his dreams.

This guy should have known better, how unromantic to be proposed to at a mall food court watched on by people eating. She ran out of there like she saw a huge rat.

This guy was so nervous he did an extremely poor job of proposing, the words just didn’t seem to come out right but that wasn’t the most humiliating part.

4. Failed Wedding Proposal At a Game

It was bad enough being turned in front of a public crowd but having a slap too doubles the humiliation in this wedding proposal fail.

The saddest part is that his girlfriend seemed to be so excited until she realized what her man was up to. You can actually see his heart breaking as she sprinted from the court.

It looks like this guy had planned and practiced this proposal so much but it wasn’t enough to win his girlfriend over, maybe it was his dancing that scared her off.

Have you ever been proposed to? How was the question popped?