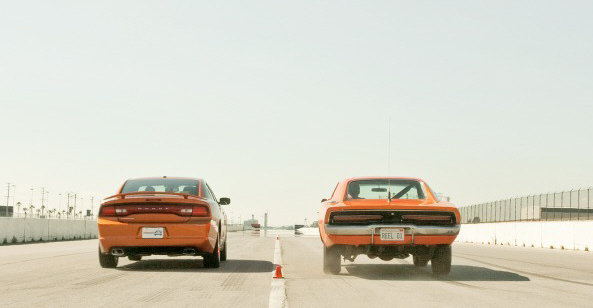 The guys at Inside Line made a video back in 2011 comparing the 2011 Dodge Charger R/T with the famous bright orange General Lee and no it’s not another ’69 Charger dressed up as the General but one of the few surviving cars from the Dukes of Hazard series.

Most of the real General Lees were sacrificed while making the TV series but this is an original orange painted General Lee with the American Racing Vector wheels.

Bob Hartwig is the owner of this classic muscle car and is a collector of movie and television vehicles. Hartwig claims that the Charger is pretty much in its original condition as used in the show with a few minor tweaks to the engine and an increase in ponies.

The following video is an interview with the owner of the General Lee – Bob Hartwig who gives us the low down on his Charger.